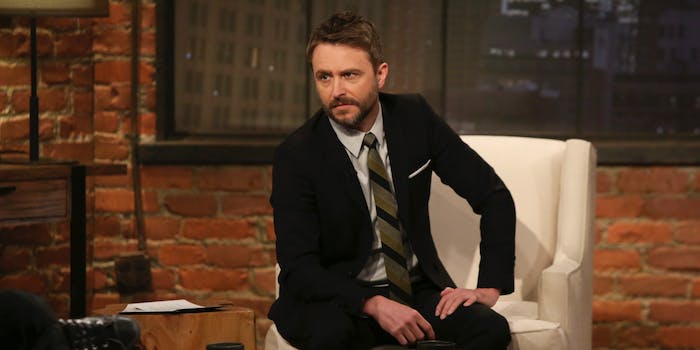 Not everyone is happy about his reinstatement.

Chris Hardwick made an emotional return to Talking Dead Sunday night, his first episode since being reinstated by AMC after his ex-girlfriend Chloe Dykstra said that he emotionally and sexually abused her.

But while some fans have welcomed back Hardwick with open arms, not everyone is happy about the reinstatement. Along with the kind of online criticism that now pops up every time Hardwick makes headlines, several staff members who worked on Talking Dead, including a female executive producer, have reportedly quit the show in protest of his reinstatement.

Hardwick directly addressed the audience at the beginning of the show, in which he and guests dove into the midseason premiere of Fear the Walking Dead. He was in tears as he thanked the audience and the Walking Dead community for their support while he did not specifically say what fans had supported him through over the past two months.

“I really just want to take a minute and I want to say that I’m so appreciative to be standing here right now and I want to thank you—The Walking Dead community—for all your support over these past couple months,” Hardwick said. “You know, this show is not just a job to me, this is a vital part of my life, this has been a sanctuary these last seven years we’ve been here.”

He also thanked the producers, cast, and crew of The Walking Dead and Fear the Walking Dead “for allowing me to come here and be a part of this community every week.”

Hardwick’s statement is so vague that to those who weren’t aware of what he faced, it could’ve referenced just about anything. Critics have similarly pointed to him for being the latest example of domestic abuse allegations not hurting a man’s career in Hollywood.

Dykstra wrote about her relationship with Hardwick back in June, and although she did not name Hardwick, many were able to identify him by descriptors she used in the post. Dykstra, who wrote the post to get closure, said that the ex-boyfriend isolated her, abused her, and after their breakup, she said that she faced retaliation professionally. She also said that she had evidence to back up her words if she faced litigation from the ex-boyfriend.

The fallout swiftly followed as Hardwick, who denied allegations of abuse, was dropped as a moderator at San Diego Comic-Con, removed from Nerdist’s website (which he founded), and suspended from the shows he worked on at AMC and NBC; Yvette Nicole Brown was named an interim host while the investigation played out. Larger conversations about the kind of geek misogyny Hardwick perpetuated as the so-called “king of the nerds” persisted while those who supported Hardwick called Dykstra’s post a witch hunt.

While Dykstra received support from fans and friends, some of her old texts to Hardwick were used against her in the tabloids while some of Hardwick’s ex-girlfriends and friends defended him. But weeks later, Hardwick is starting to be reinstated to his previous jobs. AMC cleared him in an investigation, which Dykstra did not participate in because she felt that she wouldn’t be protected. (The investigation led by AMC was not a criminal investigation.) Dykstra reiterated that she did not write her post to get Hardwick fired from his jobs, and soon after Hardwick’s name was also put back on Nerdist’s website.

I originally wrote my essay so I could move on with my life, and now I intend to do so. Thank you, again, to those who have supported me during this. pic.twitter.com/sjBEKGpY7v

Hey dudes. Just a reminder: I 100% stand by every single word of my essay. I made sure it was unembellished, factual, and that I had evidence to back it up in order to protect myself in case of ACTUAL litigation (not a network investigation, where I’m not protected). That is all.

For the king of the nerds, it’s back to business as usual—for better or worse.