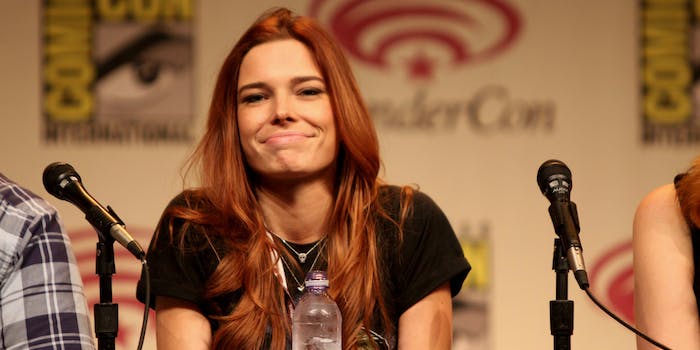 Many believe the abusive ex is Chris Hardwick.

Actress, cosplayer, and host Chloe Dykstra shared a post on Medium detailing years of emotional abuse, sexual assault, and being blacklisted from the entertainment industry by an ex-boyfriend who many believe to be geek powerhouse Chris Hardwick.

Dykstra described her ex-boyfriend, who she doesn’t name but said she dated in her early 20s and was 20 years her senior, as “celebrity obsessed” and someone who went from a “mildly successful podcaster to a powerhouse CEO of his own company” during their relationship. She said that he alienated her from many of her friends and established rules forbidding her from drinking (he was sober), going out with friends, speaking in public, or taking photos together.

According to Dykstra, the ex-boyfriend regularly sexually assaulted her and coerced her into sex even when she wasn’t feeling up to it, noting that she was “occasionally in tears” during sex.

“At the beginning of our relationship, I was quite ill often due to my diet, something I’ll get to in a bit,” she wrote. “One night he initiated, and I said, ‘I’m so sorry, can we not tonight? I’m feeling really sick.’ He responded, ‘I just want to remind you, the reason my last relationship didn’t work out was because of the lack of sex.’ It was a veiled threat. I succumbed.”

Dykstra said that during the relationship, she suffered physically and emotionally. She said that the ex-boyfriend had deep insecurities and fears of being alone, and during their relationship, he worried that she would publicly speak about how he treated her. After she had surgery for an ectopic pregnancy, Dykstra said that the ex-boyfriend asked the doctor when Dykstra was able to have sex again in front of her and her mother. She compared staying in the relationship to digging a hole to find water.

“I believed that, to borrow an analogy from a friend, if I kept digging I would find water,” she wrote. “And sometimes I did. Just enough to sustain me. And when you’re dying of thirst, that water is the best water you’ll ever drink. When you’re alienated from your friends, there’s no one to tell you that there’s a drinking fountain 20 feet away. And when your self-worth reaches such depths after years of being treated like you’re worthless, you might find you think you deserve that sort of treatment, and no one else will love you.”

After Dykstra left him, she said that he destroyed her career and called companies she worked with and threatened not to work with them again if they continued to work with her. She lost many of her friends, and at one point contemplated suicide. (She says that she’s gotten help from a therapist, a psychiatrist, and other people in her life.)

Although Dykstra never mentions the ex-boyfriend by name, many have already guessed that Dykstra is talking about her relationship with Hardwick, whom she dated from 2011 to 2014. Hardwick, a visible presence in geek culture, has hosted the Nerdist Podcast (now rebranded as ID10T) since 2010, hosts several TV shows including The Talking Dead, and regularly moderates some of the biggest panels at San Diego Comic-Con and New York Comic Con; BBC America announced Thursday that Hardwick will be hosting the Doctor Who panel at San Diego Comic-Con next month.

Dykstra’s details about her ectopic pregnancy also tie her post to Hardwick. They both discussed an ectopic pregnancy during a 2013 episode of the Nerdist Podcast, with Dykstra downplaying the seriousness of the situation. (The segment starts around 1:18:48.) Although the quote Dykstra attributes to her ex-boyfriend does not appear in the podcast, some of the details in her post lined up, including Hardwick staying at the hospital when she got the surgery.

Since the post went up, Dykstra has received support from fellow actors and creators.

I'm so sorry you endured this .@skydart and applaud your bravery for speaking your truth. So much of what you wrote resonates with me and I'm sure way too many others. #metoo thanks @RobertKazinsky for sharing and to all the men out there who actually have our backs. https://t.co/KGollTgCoE

Big, supportive waves of love to @skydart for her incredibly honest & brutal #MeToo unburdening. I think that’s the best term I can give to it; “unburdening.” People have to carry this shit around. Love on ya, & on @RobertKazinsky who is the softest, sweetest rock I know.

Dykstra also tweeted about her gratitude regarding the reception of the post from those who’ve read it.

I quietly posted an article today, unlisted on Medium. It clearly made the rounds. I’m overwhelmed and I want to thank all of you for your support and kind words- they mean so much to me. I may take some time off the internet, please know your support means everything to me.

Dykstra said she wrote about her ex-boyfriend as a form of closure to that part of her life, noting that talking about it is likely to hurt her career.

“I knew it was unlikely people would choose to believe me over a cheery-sounding famous guy,” Dykstra wrote. “All it would do to properly come forward was hurt me. And guess what? It will probably hurt me now too, despite the #MeToo movement. We’ve come a long way, but we still have a ways to go.”

The Daily Dot has reached out to both Dykstra and Hardwick for comment.