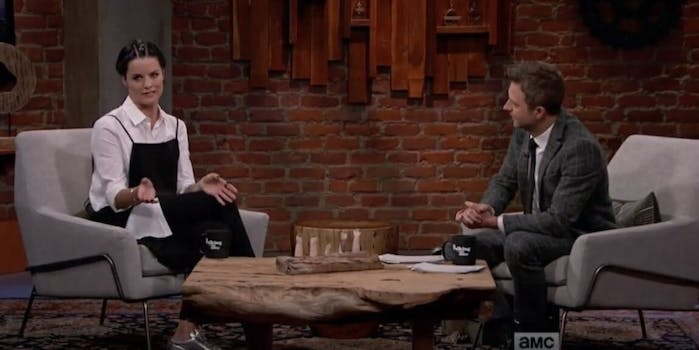 Thousands of people want Hardwick back on TV.

Chris Hardwick, the talk-show host accused by his ex-girlfriend of being a serial abuser, has found another defender. Jaimie Alexander is not only defending him; she’s signed a petition to bring Hardwick back to TV.

On Thursday, Alexander, a Thor co-star and a long-time friend of Hardwick’s, tweeted a Change.org petition asking AMC to bring Hardwick back to its airwaves. Wrote the petition’s creator Carrie Lynne, “If you are tired of the Hollywood Accusations then sign below and the petition below and tell AMC to bring Chris Hardwick Back!” As of this writing, more than 12,400 people had signed it.

Earlier this month, Chloe Dykstra, Hardwick’s former girlfriend of three years, wrote a Medium post stating that an ex-boyfriend had spent years emotionally abusing her, sexually assaulting her, and blacklisting her from Hollywood after their relationship ended. Though Dykstra never called out Hardwick by name, it didn’t take much detective work to determine that’s who she most likely meant.

Hardwick later responded that he was “blindsided” by the allegations, vehemently denied them, and said he broke up with her because she cheated on him. Hardwick was dropped from Comic-Con, and the second season of his talk show on AMC was postponed in the wake of Dykstra’s post.

But Hardwick has his defenders. Hardwick’s wife, Lydia Hearst, said last week, “I remain in complete support of my husband, and I believe that the truth will always win.” Jacinda Barrett, who dated Hardwick and was briefly engaged to him in the 1990s, wrote, “The accuser’s story bears no resemblance to the one I shared with him all those years ago, but what is of supreme importance here is that every woman and every man deserves a voice. Accuser and Accused. Everyone deserves to be heard. A rush to judgement (sic) denies the right to due process; the Metoo movement deserves due process.”

Janet Varney, another Hardwick ex-girlfriend, also defended him this week, telling the Los Angeles Times, “Over the seven years Chris and I were together, I was never subjected to any kind of sexual abuse or controlling behavior whatsoever.”

Now, Alexander has given Hardwick her support, writing that she’s known him for 10 years, including during the time of his breakup with Dykstra, and that she is “choosing to follow my heart, my instincts, and support my friend.”