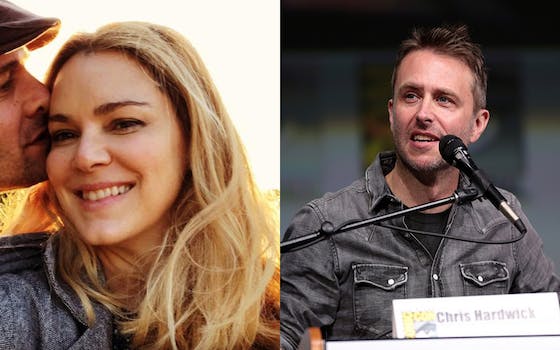 The actress said Hardwick 'deserves to be heard.'

On Thursday, Lydia Hearst announced she would be standing by her husband, Nerdist founder Chris Hardwick, in light of the abuse allegations against him. Now another woman has spoken out in his defense.

In an Instagram post on Monday, actress and former model Jacinda Barrett said that experience relayed by Chloe Dykstra in a personal essay detailing an abusive relationship “bears no resemblance” to the relationship she shared with Hardwick. Barrett and Hardwick were briefly engaged in the 1990s, when she was enjoying fame as a Real World contestant, and he was hosting MTV’s Singled Out, according to the Hollywood Reporter.

Barrett’s photo included a quote from herself.

“Imagine you are sitting a courtroom,” Barrett wrote. “A person walks in and in their own words reads a statement accusing you of wrongdoing. The punishment for this crime is to lose your livelihood, legacy, reputation, and to be publicly shamed. Without examination of evidence, without due course the judge turns to everyone there and says what do you think? Guilty?”

In her caption, she called for “due process,” echoing the statement made by Hearst in support of her husband.

Following the allegations, Nerdist released a statement distancing the company from Hardwick and removing all references to him from its website. Hardwick’s AMC talk show, Talking With Chris Hardwick, was also suspended, and his new hosting position for The Wall is being reassessed by NBC.

Many of Hardwick’s friends and family have been hesitant to comment publicly on the allegations. His close friend, actor Wil Wheaton, said he needed time to process the recent events. Hardwick’s co-host on The Nerdist Podcast Jonah Ray Rodrigues tweeted, “I’m sorry and I’m figuring it out.”

In Dykstra’s essay, she said she knew it was “unlikely” that people would believe her over Hardwick. “All it would do to properly come forward was hurt me,” she wrote. “And guess what? It will probably hurt me now too, despite the #MeToo movement. We’ve come a long way, but we still have a ways to go.”