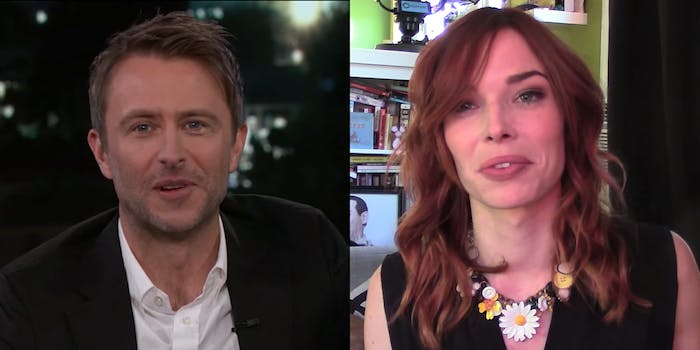 The texts don't negate the credibility of Dykstra's story.

Last week, Hardwick said he was “blindsided” by the Medium post Dykstra wrote detailing years of emotional abuse and repeated sexual assault. The texts appear to show Dykstra reaching out to Hardwick and expressing regret for problems in their relationship months after he broke it off for good.

“Hey. When can we be okay? Will that ever happen?” Dykstra allegedly wrote in January 2015.

A message Hardwick sent her on July 1, 2014, expressed at great length issues in their relationship, including accusations that Dykstra cheated on him with a man referred to as “Sam” and continued her relationship with him while giving Hardwick hope they would get back together. Hardwick wrote that Dykstra’s involvement with Sam was “the worst thing that has ever happened to me” and that he wouldn’t be contacting her anymore.

Texts appear to show Dykstra writing “please” and “I will always love you” in response to his final message to no avail, then messaging him again six months later.

But whatever TMZ’s implications were in publishing this story—TMZ reported that sources close to Hardwick said it was difficult to believe Dykstra would reach out to Hardwick if she was being abused—texting post-breakup is extremely common, even and especially in abusive relationships.

According to the National Domestic Violence Hotline, women leave an abusive relationship an average of seven times before leaving for good. The texts don’t negate the credibility of Dykstra’s story. Not at all.

TMZ publishing Chloe Dykstra’s texts is pretty damn gross and does nothing to exonerate Hardwick or dispel accusations of abuse.

In her essay, Dykstra acknowledged coming forward about her experience would be difficult even amid the #MeToo movement. Unfortunately, she was right, and people will continue to look for any excuse to discredit her story. She said it herself: “We’ve come a long way, but we still have a ways to go.”