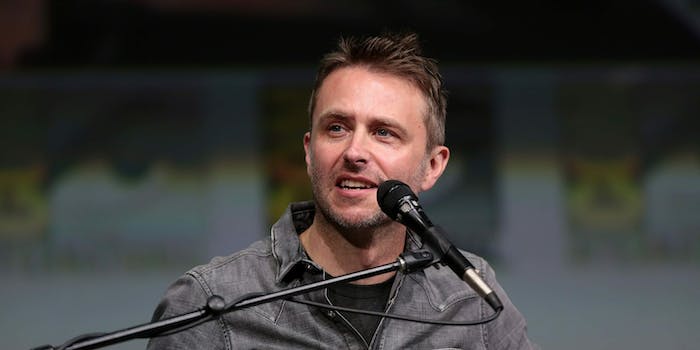 Like most famous men accused of abuse, he's already making a comeback.

After losing several of his jobs due to sexual abuse allegations last month, media personality Chris Hardwick has been reinstated as the host of AMC’s Talking Dead and Talking With Chris Hardwick. This move is already earning widespread criticism, as people express doubts about AMC’s investigation into Hardwick’s behavior.

When Hardwick’s ex-girlfriend Chloe Dykstra shared detailed accusations of domestic abuse in their relationship, she received overwhelming support from fans and public figures on social media. Hardwick, who denied the allegations, was quickly dropped from his TV talk shows and Comic-Con panels. Nerdist, the geek media outlet he co-founded in 2012, publicly severed ties. By reinstating him on Talking Dead and Talking With Chris Hardwick, AMC either implicitly denies the abuse allegations, or doesn’t see them as a problem.

“Following a comprehensive assessment by AMC, working with Ivy Kagan Bierman of the firm Loeb & Loeb, who has considerable experience in this area, Chris Hardwick will return to AMC as the host of Talking Dead and Talking With Chris Hardwick. We take these matters very seriously, and given the information available to us after a very careful review, including interviews with numerous individuals, we believe returning Chris to work is the appropriate step.”

Loeb & Loeb, the law firm conducting AMC’s assessment, also represents the Hearst family, Hardwick’s in-laws. Hardwick’s wife, heiress Lydia Hearst, and his mother-in-law, Patty Hearst, both publicly voiced support for Hardwick after the allegations came to light. It’s also worth noting that this wasn’t a criminal investigation. Rather than “proving” that Hardwick is innocent or the accusations were false, AMC’s assessment only means one thing: The network decided he was still worth employing as a TV host.

While Hardwick definitely has some supporters, the geek media community isn’t welcoming him back with open arms. On social media, the response to AMC’s decision is generally negative.

If only Chris Hardwick had some bad tweets. Then he definitely would’ve been fired https://t.co/4czmhgyk55

Hardwick is returning to Talking Dead but only under these conditions:

-He’s not go out at night.
-Not to have any close male friends unless they’re coworkers.
-Not to speak in public places.
-Not to take couple photos.

For the many people who believe Dykstra, Hardwick’s reinstatement proves that even in the #MeToo era, sexual abuse allegations are not enough to end a man’s career (or worse, that we’ve already hit Me Too “fatigue”). It also highlights the uneven nature of how media companies react to personal scandals.

In the past week, Disney fired Guardians of the Galaxy director James Gunn for making offensive jokes on Twitter—jokes that he posted several years ago, and only received attention thanks to “alt-right” trolls who objected to Gunn’s politics. Meanwhile, HBO confirmed it is “comfortable moving forward” with a second season of The Deuce, after its star James Franco was accused of sexual misconduct by five women in an L.A. Times exposé. At San Diego Comic-Con last weekend, Warner Bros. brought Johnny Depp onstage to promote Fantastic Beasts just an hour before his ex-wife Amber Heard (who accused him of domestic violence) appeared to promote Aquaman for the same studio.

Following the Harvey Weinstein scandal last year, reporters unearthed a shocking number of sexual abuse stories in Hollywood. However, Weinstein and Kevin Spacey—with dozens of allegations against them—are the only high-profile cases who faced career-ending consequences. Other celebrities either faced reputational damage while continuing to get work (Depp, Franco, T.J. Miller, Joss Whedon), or lost their jobs before gearing up for a comeback (Hardwick, Louis C.K., Jeffrey Tambor). This creates the impression that either all these women are lying (which is not the case), or that their trauma is less important than a famous abuser’s career.