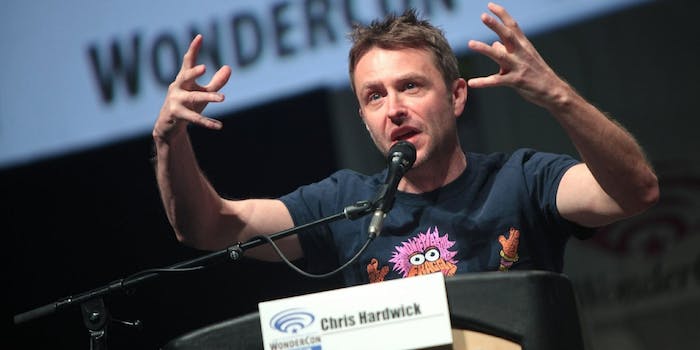 Others are also studying their relationships with Hardwick.

Though Chris Hardwick on Friday night strongly denied that he had sexually assaulted his former girlfriend, Chloe Dykstra, the fallout for the podcast and TV show host continues.

His AMC talk show, which was set to premiere its second season Sunday, will not air, according to the New York Times, and he has been dropped from moderating two panels at next month’s San Diego Comic-Con, Entertainment Weekly reported.

Dykstra published an essay on Medium on Friday in which she described how an ex-boyfriend had repeatedly sexually assaulted her, emotionally abused her, and blackballed her from the entertainment industry after their relationship ended. Dykstra didn’t name the ex-boyfriend, but it seemed obvious that she was referring to Hardwick.

Late Friday, Hardwick responded to the allegations, vehemently denying them and saying he was “blindsided” by the essay. He also accused Dykstra of cheating on him and said that her infidelity was the reason their three-year relationship had ended.

“I was heartbroken to read Chloe’s post,” Hardwick said in a statement. “Our three-year relationship was not perfect—we were ultimately not a good match and argued—even shouted at each other—but I loved her, and did my best to uplift and support her as a partner and companion in any way and at no time did I sexually assault her.”

But those words weren’t enough to stop AMC and Comic-Con from distancing themselves from the Nerdist founder and the Talking Dead host.

“We have had a positive working relationship with Chris Hardwick for many years,” AMC said in a statement. “We take the troubling allegations that surfaced yesterday very seriously. While we assess the situation, Talking With Chris Hardwick will not air on AMC.”

Hardwick was scheduled to host the Doctor Who panel at Comic-Con along with introducing the new season of the The Walking Dead. Hardwick also hosts The Wall game show on NBC, which released a statement Saturday saying, “These allegations about Chris Hardwick took us by surprise as we have had a positive working relationship with him. However, we take allegations of misconduct very seriously. Production on The Wall does not begin until September, and in the meantime we are continuing to assess the situation and will take appropriate action based on the outcome.”