This British dystopian movie is a tense and thoughtful twist on the zombie genre.

After a summer of lackluster franchise sequels, British zombie movie The Girl With All The Gifts is a breath of fresh air. Making incredibly good use of its $5.2 million budget, it could be the rightful heir to 28 Days Later.

Written by comic book author Mike Carey (Lucifer, Hellblazer) and directed by Colm McCarthy (Peaky Blinders, Sherlock), The Girl With All The Gifts has an unusual origin story. Instead of being a straight adaptation of Carey’s 2014 novel of the same name, he wrote the screenplay and the book at the same time. Against all the odds, both turned out great: The novel was well received by critics, and the film is a deliciously tense and clever twist on classic zombie tropes.

The girl from the title is Melanie (Sennia Nanua), an alarmingly upbeat inmate in a post-apocalyptic bunker, where a class of children are kept locked in cells and transported by wheelchair to their daily lessons with Miss Justineau (Gemma Arterton), a kind of dystopian future Mary Poppins.

It slowly becomes apparent that Melanie and her classmates are infected with  the same zombie fungus that destroyed human civilization outside, but there’s something different about the children. Instead of being mindless monsters, they’re dormant. They only act like zombies when exposed to bodily fluids, and the scientists in the facility are hoping this mutation could hold the key to a vaccine. The kids aren’t prisoners, they’re lab rats.

The Girl With All The Gifts relies on classic zombie horror tropes for its tense thriller atmosphere, but it stands out due to its thoughtful concept and unique protagonist. Another film might have spent more time prevaricating about Melanie’s personhood, but it’s clear from the beginning that she isn’t a monster in disguise, she’s just a (relatively) normal girl with a horrifying disease. Her main struggle is to maintain a sense of self while the adults in the bunker make every effort to dehumanize her.

Some characters like Sergeant Parks (Paddy Considine) are actively cruel to the children, while the scientist Dr. Caldwell (Glenn Close) views them with chilly detachment. But even this is more complex than it seems, because their coldness is borne of self-preservation. They can’t allow themselves to form relationships with the children, because they might have to shoot one at any moment.

Melanie is an outlier because she makes a daily effort to be as friendly and cheerful as possible, even as the guards strap her into a wheelchair with a gun to her head. Everyone except Miss Justineau finds this creepy as hell, either because they view Melanie as a monster, or simply because Melanie shouldn’t be so happy when she’s living in Hell. This is the point where the film’s casting choices feel especially relevant: not only are three of the four lead characters female—still a rarity in genre movies—but the narrative is built around powerful adults being terrified and threatened by the body and humanity of a young black girl. 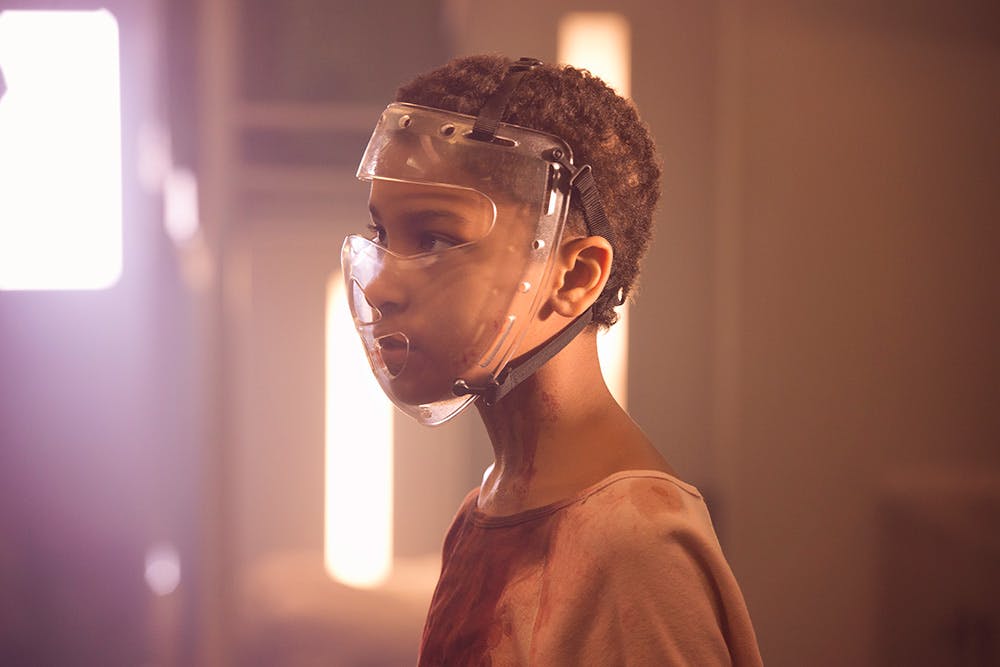 The Girl With All The Gifts

Even alongside experienced actors like Glenn Close, 13-year-old Sennia Nanua is the true star, from her lovable childlike moments to her haunting microexpressions when Melanie realizes she’s about to go feral. There’s a constant tension between Melanie’s innocent love for Miss Justineau, and the knowledge that something could go wrong at any moment.

The Girl With All The Gifts manages the rare feat of finding a new direction among the familiar elements of a zombie story, reframing the apocalyptic outbreak as a kind of Darwinian conflict where the desperate, cruel humans may not actually deserve to survive. And without spoiling any later plot twists, we can say that it does go somewhere interesting with these ideas.

The film’s low budget is occasionally noticeable during special effects shots, but this only serves to highlight how much can be done with a good idea and an excellent cast. It’s miles ahead of recent mainstream offerings like World War Z and Pride and Prejudice and Zombies, making it more like the Ex Machina of the zombie genre.

The Girl With All The Gifts is out in the U.K. on Sept.23, and at festival screenings in the U.S.