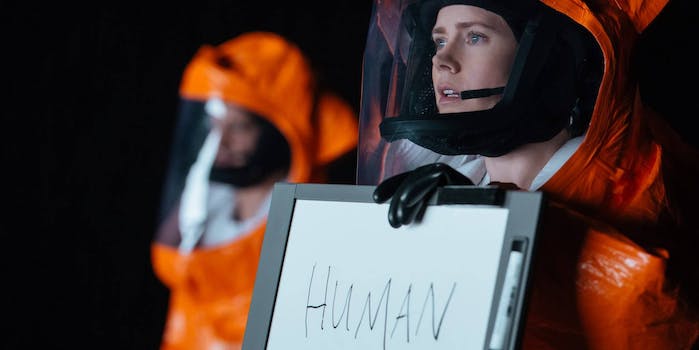 Review: ‘Arrival’ is the must-see science fiction film of 2016

Fans of Christopher Nolan movies will love the thoughtful and thrilling alien first-contact story of 'Arrival.'

Based on Ted Chiang’s novella Story of Your Life, Arrival is an unusually smart and thoughtful exploration of a classic sci-fi scenario: Earth’s first contact with aliens.

The title hints at the film’s attitude toward our alien visitors, who are never portrayed as an invading force. They simply arrive, 12 looming black “shells” hovering above random locations across the globe. People understandably begin to panic about an Independence Day scenario, but the shells remain enigmatic and inert, raising the question: Why are they here?

Amy Adams stars as the accomplished linguist Dr. Louise Banks, recruited by the military (represented by Forest Whitaker, in a sympathetic but rather one-dimensional role) to translate the language of the alien Heptapods. Accompanied by physicist Ian Donnelly (an affable Jeremy Renner, wearing glasses as a concession to geekiness), she’s faced with the intimidating task of communicating with creatures who float in an unbreathable atmosphere, rely on incomprehensible anti-gravity technology, and seem to “speak” in tones impossible to recreate with a human voice.

It’s a familiar set-up, with Louise and Ian’s academic curiosity clashing with the trigger-happy urges of their military overseers. As is often the case in this kind of story, our heroes’ greatest obstacle is humankind’s propensity for lashing out against the unknown.

The topic of alien communication was most famously explored in Close Encounters of the Third Kind, although Arrival has a lot more in common with the work of Christopher Nolan. High-concept science fiction is blended with effective visual effects and well-placed pockets of tension (director Denis Villeneuve is best known for the thriller Sicario), making the film accessible without talking down to its audience. It’s certainly more coherent than Interstellar, which was occasionally awe-inspiring but whose central conceit collapsed into metaphysical nonsense in the final act. Arrival offers a more elegant conclusion, tying into the film’s philosophy of language and communication.

While Eric Heisserer’s screenplay doesn’t offer much depth of characterization, that doesn’t really matter in the light of Amy Adams’ terrific performance. Quiet and self-contained, Louise is defined by her professional success and private grief over the death of her daughter. Some of her strongest scenes are her very realistic freakouts about meeting real, live aliens, a reaction that Arrival leans into throughout. Even if the international examples are a little stereotypical (the Chinese are isolationist and paranoid; the Russians are warlike), it’s easy to understand why people would be terrified of the Heptapod ships, which are imposing and ominous without ever actually threatening anyone.

Arrival is a strong argument for more mid-budget sci-fi movies, and a film that relies on an interesting idea and a talented creative team (Bradford Young’s cinematography and Jóhann Jóhannsson’s score are particular highlights) over flashy action sequences and simplified exposition. Atmospheric and thoughtful, it’s an ideal choice to introduce hard sci-fi to a wider audience.

Arrival is screening at the London Film Festival this month, and will be released in the U.S. on Nov. 11.