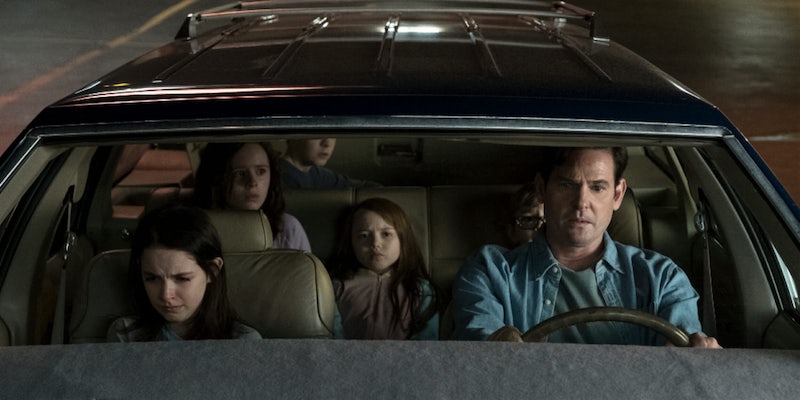 The Netflix adaptation plays literally and figuratively with the ghosts of our past.

In Shirley Jackson’s 1959 novel The Haunting of Hill House, the titular mansion is investigated by a group of people with their own motivations for being there. It was a subversive book for the time, and focused on motherhood, psychology, and the need for liberation. A passage about the creepiness of the house could be a metaphor for women’s experience: “I am like a small creature swallowed whole by a monster, she thought, and the monster feels my tiny little movements inside.”

Mike Flanagan’s Netflix adaptation of Jackson’s work makes a family—the Crains—and their twisted collective history the narrative thread. But he manages to keep the focus on engaging female characters while building out a new world. The 10-episode series toggles between the past and present, as we see the Crain family living at Hill House and then reconvening after a death. In the present day, Theodora (Hush’s Kate Siegel) is a child psychologist, brother Steven (Michiel Huisman) is the author of a book about Hill House, Shirley (Elizabeth Reaser) is a mortician. The Crain twins, Luke (Oliver Jackson-Cohen) and Nell (Victoria Pedretti), have been more plagued by their childhoods at Hill House; they have their own unique specters that continue to haunt them.

While Hill House’s first half establishes more of the scares and dread, with some excellent performances from Carla Gugino as mother Olivia and McKenna Grace as young Theodora, the second half dives deeper into familial trauma, grief, and addiction; the cycle is illustrated by each child and the baggage they’ve carried into their adult lives. In one episode, we see how Luke is haunted by addiction; elsewhere, Theodora uses her special sensory ability to a uncover the abuse of one of her patients but has a hard time making any relationships in her life work. Shirley appears to be more comfortable with the dead than the living. Their father, Hugh (played by Henry Thomas in flashbacks and Timothy Hutton in present day), seems shell-shocked and struggles to relate to his kids.

Episode 6 is a standout, and unspools almost like a play, at least in terms of staging. It’s a single-shot bottle episode with a lot of 360 pans (Flanagan indulges them to mostly good effect here), as the family gathers in Shirley’s funeral home after a tragic death and resentments are unleashed. Later, Reaser and Siegel have an emotional reckoning after a betrayal that feels real and annihilating. Somewhere between the artificial emotional punch of This Is Us and the poisoned family tree of Hereditary sits Flanagan’s series.

As with Hush and his previous Netflix adaptation, Gerald’s Game, Flanagan is skilled at heightening tension while keeping the narrative grounded. And while Hill House is debuting at a time where streaming shows about trauma and mental health mixed with the supernatural—Maniac, Castle Rock—are popular, it doesn’t feel a glut, though it does feel like intricately engineered Halloween programming. There are moments when the show stumbles; the first half takes a while to come together and requires a bit of patience. Save for the episode that explores Luke’s struggle with sobriety, the seeing-specters-in-daylight moments could have been cut back a bit.

Hill House‘s strength isn’t so much in its parts but how it works as a whole. It stays true to the aesthetic of Jackson’s novel and makes that feeling of being “swallowed whole” translate into something more relatable.