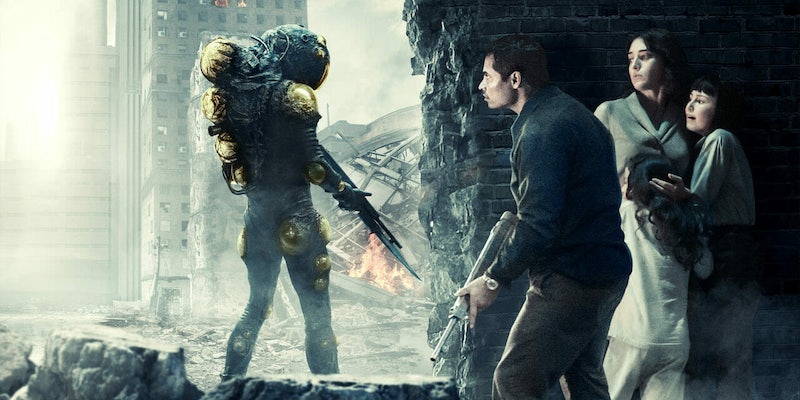 Michael Peña stars in what feels like a first draft of a film.

Extinction is the latest twist on the apocalyptic survivalist dad genre, starring Michael Peña as Peter, a man with prophetic nightmares of an alien invasion. Living in an immaculate apartment in a Stepford-esque business district, he’s married to Alice (Lizzy Caplan) and father to two rather generic kids: sulky tween Hanna (Amelia Crouch) and younger sister Megan (Lilly Aspell), who comes armed with the Chekhov’s Gun for kids—a noisy toy that will surely activate while she’s hiding from an alien.

Originally set for cinematic release in January, Universal Pictures dropped Extinction from its schedule with no explanation, which is rarely a good sign. That said, it’s now easy to queue it up Netflix and go in now with low expectations.

Adapted from Spenser Cohen’s screenplay—which appeared on the 2013 “Black List” of acclaimed but unproduced ideas,  alongside Spotlight and American Sniper), with rewrites from Eric Heisserer (Arrival) and Brad Kane (Starship Troopers)—Extinction just isn’t as original as it should be. While it does have hidden depths beyond the initial premise, it doesn’t offer enough to stand out in the crowded field of alien invasion stories.

Like many apocalyptic movies, Extinction is a survival fantasy. We want to see normal people exert control over catastrophic circumstances, and since these movies are usually made by middle-aged men, this often ties in with nostalgia for the traditional nuclear family. Office drone dads transform into action heroes, proving themselves as protectors and providers. Initially dismissed as delusions, Peter’s prophetic dreams prepare him to rescue his family when the invasion arrives. Sure, Alice is capable of thwacking an alien with a metal pipe, but Peter is the one who leads their escape.

We recently saw this dynamic play out in A Quiet Place and It Comes at Night, but they benefited from having more complex characters and relationships. The family members in Extinction are nowhere near as individualistic. Put it this way: If your wife character’s introductory scene involves looking worried while folding laundry, it’s time to dig deeper.

Things get more interesting when a new worldbuilding element arrives in the second half, but the film doesn’t give itself enough time to explore. The most thoughtful detail is probably the costume design (Suzie Harman), which provides some subtle foreshadowing before we know what’s really going on. Otherwise, Extinction comes across like an early draft in need of tighter storytelling.

You can see why Extinction wound up on Netflix. It’s not expensive or silly enough to be a blockbuster, and it’s not smart enough to be an indie hit like Take Shelter, a much more sophisticated drama about a dad who dreams of the apocalypse. It has more of a “watch on your laptop when you’re taking a sick day” vibe: a competent if unoriginal thriller where the scary parts aren’t too scary, and the sci-fi ideas don’t go too deep. Another addition to the list of streaming movies that are Just OK.