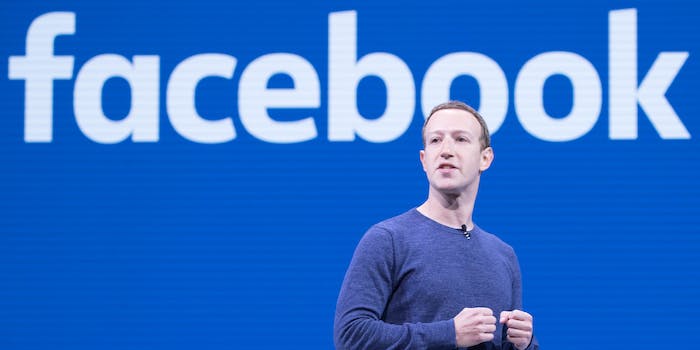 #DeleteFacebook trends amid report of Zuckerberg meeting with prominent conservatives

This isn't the first time the hashtag has picked up steam.

Thousands of people on Monday and Tuesday began posting about deleting their Facebook accounts on the heels of a report that said CEO Mark Zuckerberg had private meetings with a number of conservatives.

In response, Zuckerberg wrote a Facebook post addressing the report, saying that he has “dinners with lots of people across the spectrum on lots of different issues all the time.”

In the wake of the report, thousands of people began posting under a #DeleteFacebook hashtag on Twitter, citing their displeasure with the social media platform as a whole, as well as the meetings.

According to the Politico report, a source said Zuckerberg is willing to kowtow to conservative propaganda—such as misleading political ads from Trump—to stave off regulation off the social media giant, which infuriated people on the left, sparking the calls to delete the platform.

“Let’s send a message to CEO Mark Zuckerberg of @facebook… who has already deleted or will be deleting their FB cuz you won’t stand for them being instrumental in Trump’s stealing another election? #DeleteFacebook,” one Twitter user wrote, getting more than 1,400 likes.

Other people also chimed in.

THIS is why Zuckerberg is meeting with far-right political operatives.

He's on a diplomatic mission to make sure Trump doesn't break up his business.

I wouldn't be surprised if the DOJ said, "I'm going to need a favor from you, though…" #deletefacebook https://t.co/wTnNMFXTWS

Every day that we don’t delete Facebook, is a day that we are allowing Mark Zuckerberg to trample on democracy and facilitate profitable (for him) genocide some more. #DeleteFacebook https://t.co/3RAFAgJx83

Mark Zuckerberg is corrupt to the core and Facebook systemically silences people of color who call out racism.

I took down my account a week ago and feel physically and emotionally better. #DeleteFacebook

This isn’t the first time that #DeleteFacebook was a trending topic on Twitter.

In the immediate aftermath of the Cambridge Analytica scandal—where millions of people’s data was shared without their permission—the hashtag also gained steam.

The social media giant has also faced recent scrutiny from some prominent 2020 Democratic presidential hopefuls about its political advertising policies.