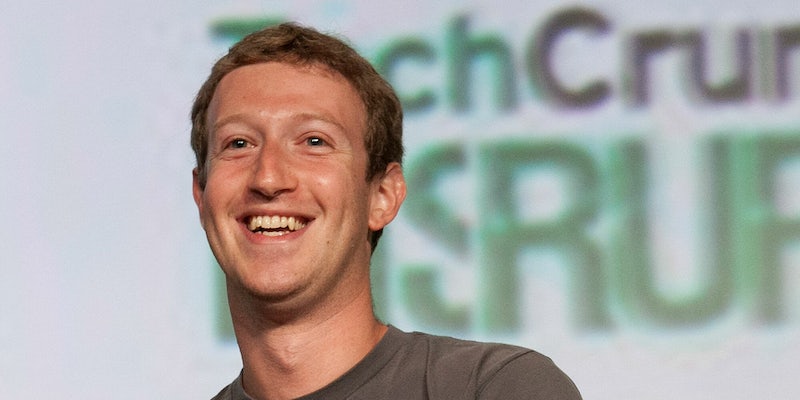 The #DeleteFacebook campaign was a resounding failure

Facebook didn't just survive the Cambridge Analytica crisis, it thrived during it.

Despite weeks of intense criticism for failing to protect the privacy of its users, new research suggests Facebook usage didn’t take a significant hit during the Cambridge Analytica scandal.

In fact, it appears to have increased, per a client note from Goldman Sachs that cites figures from media analytics firm ComScore, according to Business Insider. The investment company says the number of unique users in the U.S. rose 7 percent year-over-year to 188.6 million in April, the month the world watched Mark Zuckerberg testify before Congress.

Moreover, the time people spent on Facebook per month increased following revelations that a rogue third-party app sold the personal information of 87 million users to a political data firm. The #DeleteFacebook campaign that ripped through social media failed to muster enough support to make a dent.

The social giant doesn’t appear to have taken a significant financial hit either. Deutsche Bank says advertising system checks showed the deletion of 583 million fake accounts linked to Russia didn’t have a significant impact on audience reach. Instead, ad targeting appears to have grown.

“We note that this data represents audience reach across properties, not strictly tied to core Facebook, but we suspect they are cleaning up fake accounts across the board and view this as a broad indication that ad reach across Facebook continues to grow,” Deutsche Bank said.

The company’s usage figures don’t come as a huge surprise given Zuckerberg’s statement in the Facebook Q1 earnings release: “Despite facing important challenges, our community and business are off to a strong start in 2018,” he said.

At the time, Facebook’s daily active users in the U.S. and Canada were said to have grown to 185 million, after a slight dip to 184 million in December. By the end of March, Facebook had 2.2 billion users, up from 2.13 billion at the end of 2017. Facebook posted nearly $12 billion in revenue for the first three months of 2018, a 50 percent jump from the previous year.

The figures suggest that the series of changes Facebook made since the scandal surfaced have successfully convinced users that their information is secure, or that the importance of the social network outweighs privacy concerns.

Facebook isn’t out of the clear just yet. The Cambridge Analytica scandal is still ongoing as the company swipes through thousands of third-party apps looking for those that may have similarly misused user data. So far, after investigating “thousands” of apps, 200 were suspended “pending a thorough investigation into whether they did in fact misuse any data.”

Facebook’s image will once again be at risk when Zuckerberg testifies before the European Parliament. The hearing on Tuesday, which was originally set to be behind closed doors, will be livestreamed online.