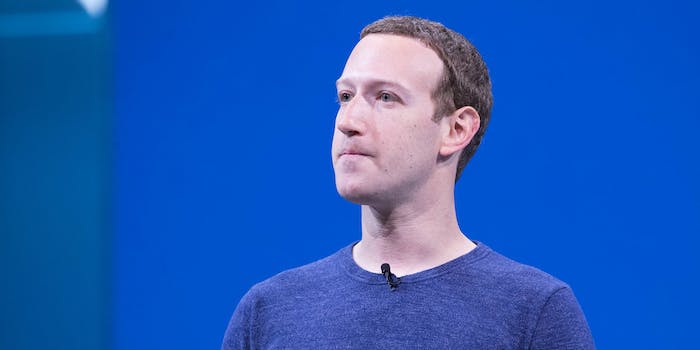 Mark Zuckerberg is reportedly having private meetings with prominent conservatives

Facebook is drawing criticism from both sides of the aisle.

Facebook CEO Mark Zuckerberg has been having several private meetings with conservative pundits, journalists, and politicians in recent months, according to a new report.

Politico reported about Zuckerberg’s meetings on Monday. The meetings come as several conservatives—including President Donald Trump—have criticized social media, including Facebook, of having a bias against them.

In June, Trump threatened to sue Facebook and other tech giants over the perceived bias.

“The discussion in Silicon Valley is that Zuckerberg is very concerned about the Justice Department, under Bill Barr, bringing an enforcement action to break up the company,” a cybersecurity researcher and former government official told the news outlet.

However, Facebook has not faced criticism from only one side of the aisle.

Last week, Sen. Elizabeth Warren (D-Mass.), a 2020 Democratic presidential hopeful, ran an ad on the platform that falsely claimed that Zuckerberg endorsed Trump in the 2020 election.

Warren explained that the ad was meant to criticize Facebook’s political advertising policy, which drew scorn from Joe Biden’s 2020 campaign after the social media giant refused to take down a Trump ad about the former vice president they said was “completely false.”

You can read all of the report from Politico here.

Update 3:27pm CT: Zuckerberg wrote a Facebook post on Monday afternoon to address Politico’s report, saying that he has “dinners with lots of people across the spectrum on lots of different issues all the time.”

He added: “Meeting new people and hearing from a wide range of viewpoints is part of learning. If you haven’t tried it, I suggest you do!”