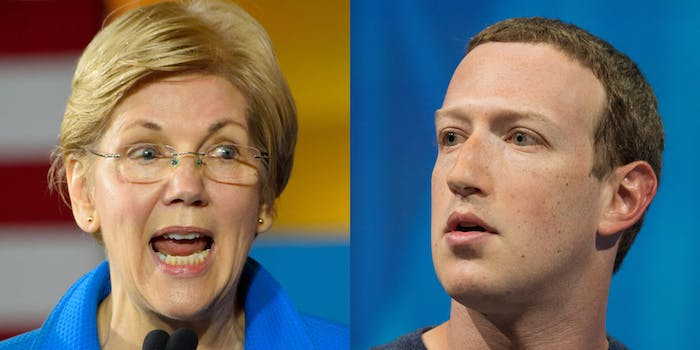 In a testy call, Zuck signals a fight over Warren and her plan to break up big tech.

The Verge has obtained two hours of leaked conversations between Mark Zuckerberg and Facebook staffers, including a juicy tidbit about the 2020 race. Zuck is out to get Sen. Elizabeth Warren (D-Mass.)

Warren is one of the most prominent progressives in the race, alongside Bernie Sanders, and unlike Sanders, Warren has released a comprehensive plan to break up big tech.

Facebook has taken a number of PR hits recently. In addition to criticism from American politicians, the social media company has run into conflict with lawmakers from the European Union (EU). Libra, the company’s cryptocurrency, is already plagued by regulatory issues, and the role of its content moderators has received journalistic scrutiny.

And now Warren is the emerging frontrunner in the Democratic primary.

A defensive Zuckerberg addressed the potential breakup of Facebook directly during the call, saying:

“You have someone like Elizabeth Warren who thinks that the right answer is to break up the companies … if she gets elected president, then I would bet that we will have a legal challenge, and I would bet that we will win the legal challenge. And does that still suck for us? Yeah. I mean, I don’t want to have a major lawsuit against our own government. … But look, at the end of the day, if someone’s going to try to threaten something that existential, you go to the mat and you fight.”

“What would really “suck” is if we don’t fix a corrupt system that lets giant companies like Facebook engage in illegal anticompetitive practices, stomp on consumer privacy rights, and repeatedly fumble their responsibility to protect our democracy,” she wrote.

What would really “suck” is if we don’t fix a corrupt system that lets giant companies like Facebook engage in illegal anticompetitive practices, stomp on consumer privacy rights, and repeatedly fumble their responsibility to protect our democracy. https://t.co/rI0v55KKAi

Warren and her team released a plan to break up big tech back in March, and the Massachusetts senator remains the only candidate to release a comprehensive plan on the issue, though several other candidates have signaled their support.

Specifically, in her proposal, Warren says she will “unwind” Facebook, WhatsApp, and Instagram, as well as the company’s other holdings.  Warren also promises to limit mergers and proprietary marketplaces in the tech space going forward.