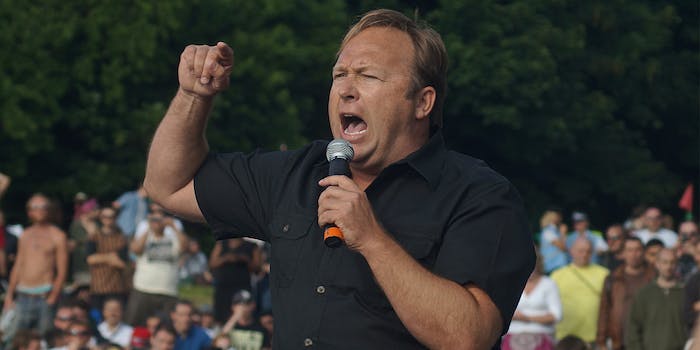 Is Alex Jones putting on an act? Here's how he got his start.

Alex Jones has built a media empire on stoking American fear and paranoia for nearly 20 years.

Name a conspiracy theory, any conspiracy theory, and chances are that the 43-year old right-wing radio host has either created it or helped perpetuate it on the airwaves. Jones is one of the original 9/11 truthers and a staunch believer of the so-called “deep state.“ He is convinced that incidents such as the Oklahoma City bombing, Sandy Hook massacre, and the Orlando Pulse nightclub shooting are false flag operations staged by the U.S. government. Reviled by most in the left and the right, Jones has carved out a niche for himself in appealing to a growing number of Americans who are distrustful of the government, the mainstream media, academia, and science.

Jones is the owner of InfoWars, one of the oldest and most prominent outlets of fake news on the internet, as well as Prisonplanet.com. The Alex Jones Show, his daily radio show recorded in Austin, Texas, has a growing audience of millions. Rolling Stone estimated that Jones’ internet audience is larger than that of Glenn Beck and Rush Limbaugh combined, and that was in 2011, years before his association with President Donald Trump propelled him into the national spotlight and scored him an infamous interview with Megyn Kelly.

Here are some of the most interesting facts about Alex Jones, the internet’s leading progenitor of conspiracy theories.

Alex Jones began his career as a media personality at the age of 20 when he started a public access show in Austin, Texas. In one iconic 1997 clip, a 23-year-old Jones warns listeners of the Austin police department’s black helicopters that can scan your home with infrared lasers as he aggressively carves a pumpkin next to a fake severed head.

2) Jones was trolled by a man known as “SpaceHitler”

Jones’ public access show was routinely the target of prank calls from a man named Clayton Counts, known in Austin alternative media as “SpaceHitler.” Counts became the target of numerous lawsuits initiated by Jones, none of which were successful.

3) It was Jones’ father, a dentist, who initially launched his son’s career

Jones was born in Dallas, Texas in 1974. His mother was a homemaker and his father was a dentist. The Jones’ later relocated to Austin when Alex was a teenager. Jones got his public access show largely thanks to his dentist father, who pitched his son to a station manager of an Austin talk radio station during a routine teeth cleaning.

After confronting a 20-something Jones in-person with a group of his friends lead to a violent brawl, a man named George Sotelo gave away a T-shirt with Jones’ blood on it to listeners on his own public access show. “The joke was that you could use the dried blood to clone Alex,” Sotelo told BuzzFeed. “It went fast.”

5) Jones’ most popular theory is the “New World Order,” a common theme in global conspiracy theories

A favorite topic of Jones is “The New World Order,” which is a conspiracy by global elites for world domination through inside-job terrorist attacks, poisoning the water supply with fluoride, secret surveillance, rigging the world financial system, and other methods. Jones’ idea of a New World Order largely came from a 1971 book he found on his father’s bookshelf: None Dare Call it Conspiracy by Gary Allen, a spokesman for the John Birch Society.

7) Jones drew the attention of Texas filmmaker Richard Linklater, who featured him in his films Waking Life and A Scanner Darkly. In Waking Life, Jones is featured driving through the streets of a city while giving one of his broadcasts over a loudspeaker.

Paranoia aside, Jones claims he is not a regular user of marijuana. But the radio host admitted during his custody trial that he does smoke pot once a year in order to “monitor its strength like law enforcement.”

In 2017, Jones lost a custody battle with his ex-wife, Kelly Jones, over his three children. Jones’ lawyer argued that his on-air InfoWars persona was “an act” and called him a performance artist. Ex-wife Kelly Jones during their custody trial described Alex as “an angry, volatile person who has racist, homophobic views” and “is enraged and out of control most of the time.”

9) Spencer and Heidi Pratt are apparently good friends with Jones

Jones is friends with Spencer and Heidi Pratt of the reality show The Hills. The couple even participated in an interview that aired on InfoWars. Whether or not it was a publicity stunt for the Pratts, it was certainly bizarre. “We were chanting ‘Death to the New World Order.” Spencer Pratt told Jones. “And then about a week later, we were no longer on television. Be careful what you say.”

10) Against all odds, Jones has become a millionaire with a massive following

Jones’ earnings are estimated to be as much as $10 million per year—a combination of paid subscriptions, ad sales, radio, and web.