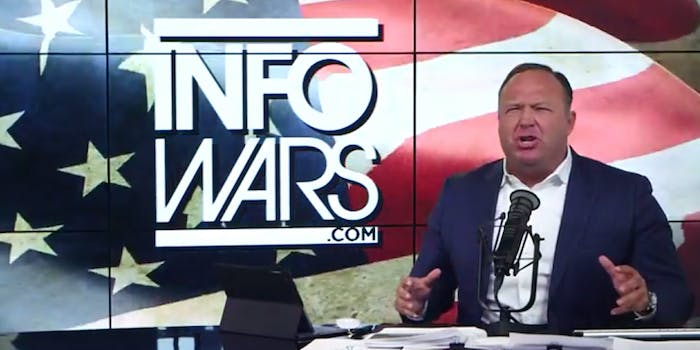 The InfoWars host has a new conspiracy theory.

InfoWars host Alex Jones has been known to push a lot of crude, incorrect, and outright bizarre conspiracy theories to his followers, but the one he came up with on Monday might just be one of the zaniest.

Jones says he has “direct intel” that globalists are slowly poisoning President Donald Trump, causing him to slur his words and become sluggish by the end of every day.

Jones said Trump has been drugged for about two months. He also claims he was “risking” his life by telling his audience about the nefarious, unsubstantiated plot.

“First it’s almost zero, just a tiny bit and then a little more and then your brain subconsciously becomes addicted to it and wants it and so as the dose gets bigger and bigger you get more comfortable in it,” Jones said of the alleged drugging.

The host continued, saying that since Trump’s much-criticized response to violent unrest in Charlottesville, Virginia, he’s become more sluggish. But don’t be fooled, it’s not “the stress of the job,” Jones said, it’s because he’s been drugged.

“Between him on the campaign trail and him getting into office, he became a bumbling moron,” Jones said of the former president. “You could look at him, and I could tell you he was drugged up. You look at him today, they admit he’s on a bunch of psychotropics. He sits there naked in his bathtub doing those paintings.”

The reason for this (100 percent unconfirmed and unsubstantiated) plot to poison presidents? The power structure wants puppets, of course.

Given InfoWars’ shaky relationship with facts in the past, it wouldn’t be smart to place too much stock in Jones’ latest assertion. Or, you could just listen to this teenager who summed up InfoWars pretty well.