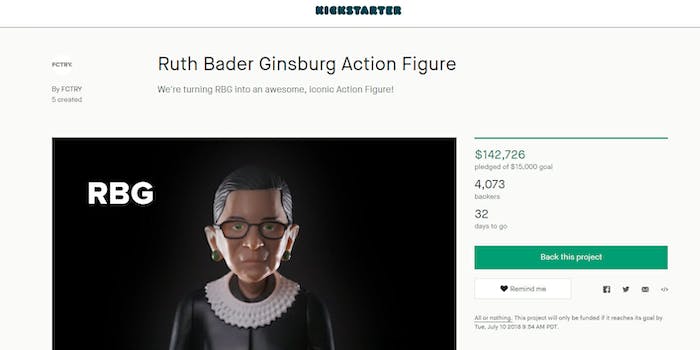 If you’ve ever felt the need to reenact your favorite Supreme Court cases involving Ruth Bader Ginsburg, you could be in luck very soon.

A Kickstarter campaign wants to turn her into an action figure.

FCTRY, a product incubator based in Brooklyn, N.Y., started the campaign earlier this week and has far surpassed its original goal of collecting $15,000—with more than $142,000 being pledged to the action figure project with just over a month to go before the Kickstarter ends.

The Ginsburg action figure promises to be incredibly lifelike. It will include her wire-rimed glasses, pulled back hair, silk gloves, and a gavel. The figure is also dressed in the traditional Supreme Court robes.

“We have an awful lot of fun making our toys and RBG is an exceptionally fun character to celebrate in this medium (we like to think of her as the Yoda of our little action figure universe),” the Kickstarter campaign reads. “But what makes this project extra-gratifying is the fact that RBG is such a tremendously positive and inspirational character to so many different kinds of people.”

FCTRY CEO Jason Feinberg told USA Today that the company assumed the RBG action figure would be popular “because we had gotten so many requests to make her over the last year or two.” The company has created action figures of Sen. Elizabeth Warren (D-Mass.), former president Barack Obama, Sen. Bernie Sanders (I-Vt.), Hillary Clinton, and President Donald Trump.

This isn’t the first toy that has been made to highlight the Supreme Court justice. In 2016, a coloring book was made that included pictures of her riding a unicorn, dressed in superhero attire, and more fun things to color in.