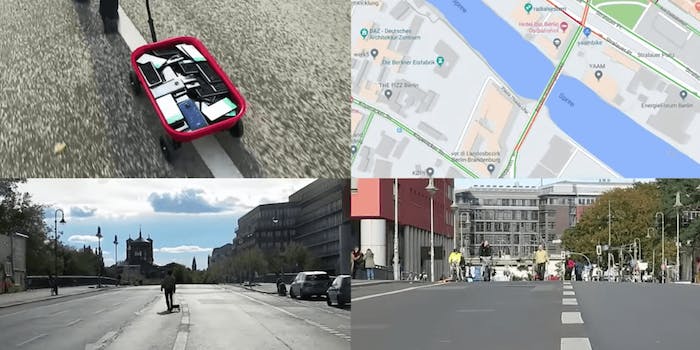 He used 99 phones to pull off the hack.

A performance artist was able to create a virtual traffic jam in Google Maps by hauling a wagon full of cell phones through Berlin, Germany.

The artist, Simon Weckert, outlined in a post on his personal blog how he used 99 smartphones to pull off the map hack.

Weckert says he was able to turn multiple streets red on Google Maps, which indicates heavy traffic, by convincing the app that dozens of drivers were moving slowly. Actual drivers would then be rerouted in order to avoid the non-existent traffic jam.

“Google’s map service has fundamentally changed our understanding of what a map is, how we interact with maps, their technological limitations, and how they look aesthetically,” Weckert writes. “In this fashion, Google Maps makes virtual changes to the real city.”

The artist goes on to note the countless apps that rely on the technology, including Tinder and Airbnb, and the significance they have in society.

“All of these apps function via interfaces with Google Maps and create new forms of digital capitalism and commodification,” Weckert adds. “Without these maps, car sharing systems, new taxi apps, bike rental systems and online transport agency services such as Uber would be unthinkable.”

Weckert’s video has garnered more than 67,000 views on YouTube and has been widely shared on Twitter as well.

“Maps, which themselves are the product of a combination of states of knowledge and states of power, have an inscribed power dispositive,” Weckert says. “Google’s simulation-based map and world models determine the actuality and perception of physical spaces and the development of action models.”