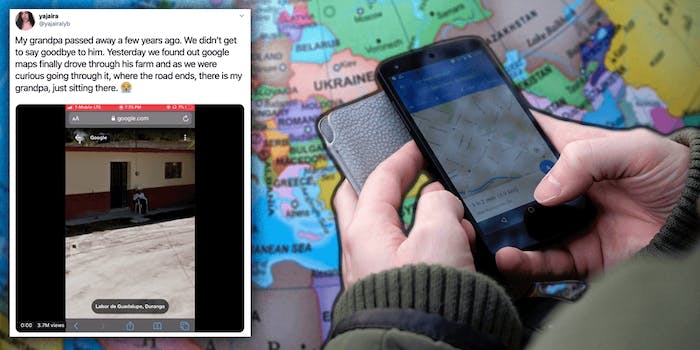 'There is my grandpa, just sitting there.'

A woman who found a photograph of her deceased relative on Google Maps has gone viral, leading countless others to share similar pictures of their deceased loved ones.

Twitter user @yajairalyb revealed on Wednesday that she discovered the image of her late grandfather after a Google Street View car captured images of his property in Mexico.

“My grandpa passed away a few years ago. We didn’t get to say goodbye to him,” yajairalyb wrote. “Yesterday we found out google maps finally drove through his farm and as we were curious going through it, where the road ends, there is my grandpa, just sitting there.”

The tweet immediately went viral, garnering more than 420,000 likes and 50,000 retweets at the time of publication.

But yajairalyb isn’t the only one who has seen a dead loved on Google Maps. Others on Twitter began responding with videos and photos that they too discovered while using Google’s service.

Twitter user @tilin98 stated that her late grandfather could also be found on Google Maps relaxing in the family’s backyard.

“Same thing with my abuelo we can see him just relaxing outside our house in Mexico,” she said. “Everytime [sic] I miss him especially during this time I always go back to it.”

It’s not just human companions who have been located on Google Maps. Twitter user @HoangryAF showed her deceased dog Lucky hanging out on a sidewalk.

“You can see my baby boy standing outside my house,” Twitter user @gelisev wrote, along with a photo of their dog.

last year i found my missing cat on google earth, i feel this so much pic.twitter.com/hb48OhmBQc

Another user’s grandfather, who passed away only last month, was also immortalized by the route planning app.

One user’s dad, in typical dad fashion, was even seen waving at Google’s vehicle as it drove by.

Even more incredibly, the thread caused many users to seek out images of their own deceased relatives.

“Because if [sic] this thread I found my dad… it’s been almost 4 years,” Twitter user @paulaesullivan wrote. “I never knew. Thank you.”

I found my tata that passed away a few years ago 🥺 pic.twitter.com/yLK5QjAF1v

The thread was also filled with grandmothers, uncles, and cousins.

Same with my grandma, walking my little sister home from the bus stop🥺💗 she passed Mother’s Day 2013 👼🏾 pic.twitter.com/rKwiCRSu5m

Omg same thing with my nana!! It’s gonna be 3 years since she passed 💗 pic.twitter.com/3Igo77fczM

And the thread is still ongoing. Seemingly hundreds of users are adding photos and sharing stories of their own.