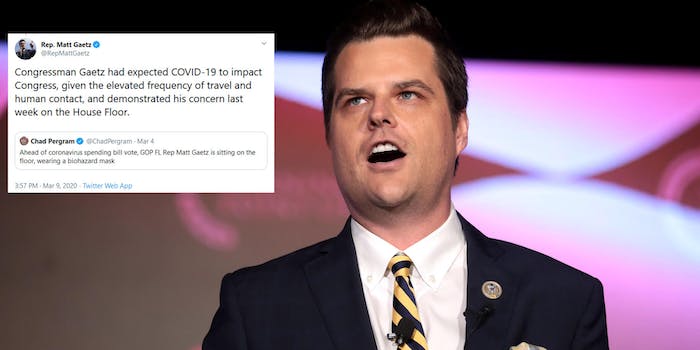 The office for Rep. Matt Gaetz (R-Fla.) is trying to spin his much-criticized photo of him wearing a gas mask on the floor of the House of Representatives.

Gaetz’s team is now saying it was done as him expecting the coronavirus to “impact Congress” now that he is in self-quarantine following his exposure to someone with the virus at CPAC.

Earlier this month, the Florida congressman, and staunch defender of President Donald Trump, wore a gas mask on the floor of the House of Representatives. Gaetz donned the mask during a vote on a funding bill to help fight the spread of coronavirus.

The tweet and stunt obviously drew scorn, despite a few days later Gaetz saying that he was “quite serious” when wearing the mask.

On Monday, Gaetz’s office seemed to try to spin the gas mask photo as him showing that he had expected coronavirus to “impact Congress.”

“Congressman Gaetz had expected COVID-19 to impact Congress, given the elevated frequency of travel and human contact, and demonstrated his concern last week on the House Floor,” his official Twitter account tweeted on Monday afternoon.

In the meantime, Gaetz is self-quarantining until this week, his office tweeted.

The tweet didn’t go over well, with many people calling the tweet an attempt to “spin” or “retcon” his gas mask stunt.

The use of gas masks and hazmat suits from far-right figures has been a way to help dog-whistle about racism while discussing the coronavirus pandemic.