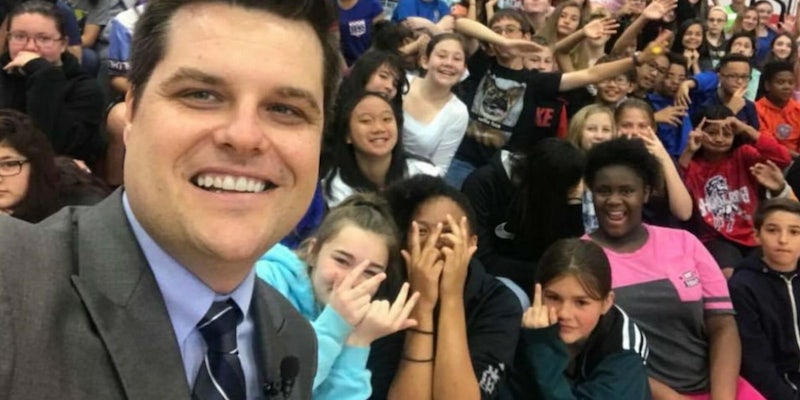 As someone who invited Holocaust denier Chuck Johnson to be his plus one to the State of the Union address (which he later called a “poor decision,” though that didn’t stop him from yachting around with Johnson months later), Gaetz is exactly the person who shouldn’t weigh in on what can properly be compared to the Holocaust.

But yesterday, Gaetz did what he does best: clipped on a mic and regurgitated some Republican talking points for his very good buds at Fox News.

In an appearance on The Story with Martha MacCallum, the first politician to get slushied took on Democratic presidential candidate Marianne Williamson’s comments about United States’ immigration policy under Trump.

In a campaign appearance, Williamson, noting that, as a Jew, she was raised to say “never again” of the Holocaust, likened deporting asylum seekers to sending Jewish people back to Nazi Germany.

“Some of those people will be deported to places so dangerous, that it actually is no different,” she said.

Gaetz was not having it.

After saying that the 2020 Democratic presidential candidates strategy appears to be “each trying to be a little more outrageous to get attention,” Gaetz brought up Rep. Alexandria Ocasio-Cortez (D-N.Y.) comparing border camps to concentration camps.

Then he issued definitive directions on when the Holocaust can properly be invoked. Which is never, according to him.

“We should never compare the challenges that we face today to the extermination of six million Jews,” he said. “When we do that, when we invoke the Holocaust or concentration camps with great frequency, then it undermines and trivializes the true horror that existed at that time.”

Gaetz is no stranger to horror. In fact, directly before he waxed philosophic on when it’s okay to compare something to the Holocaust, he had this to say about the border camps.

“I would certainly agree that a lot of the conditions in these border processing centers are horrible,” he said. “It is the worst state of the human condition that I have ever witnessed. And the second worst state is an un-airconditioned AIDS clinic in Haiti.”

Like any good Trump Republican, Gaetz blames Democrats for not approving Trump’s $4.2 billion request for humanitarian aid (it’s actually $3.3 billion, but, hey, people don’t get elected to Congress because of the maths) to address the conditions that the administration largely created with its immigration policies.

But perhaps we shouldn’t expect much of anything from Gaetz.