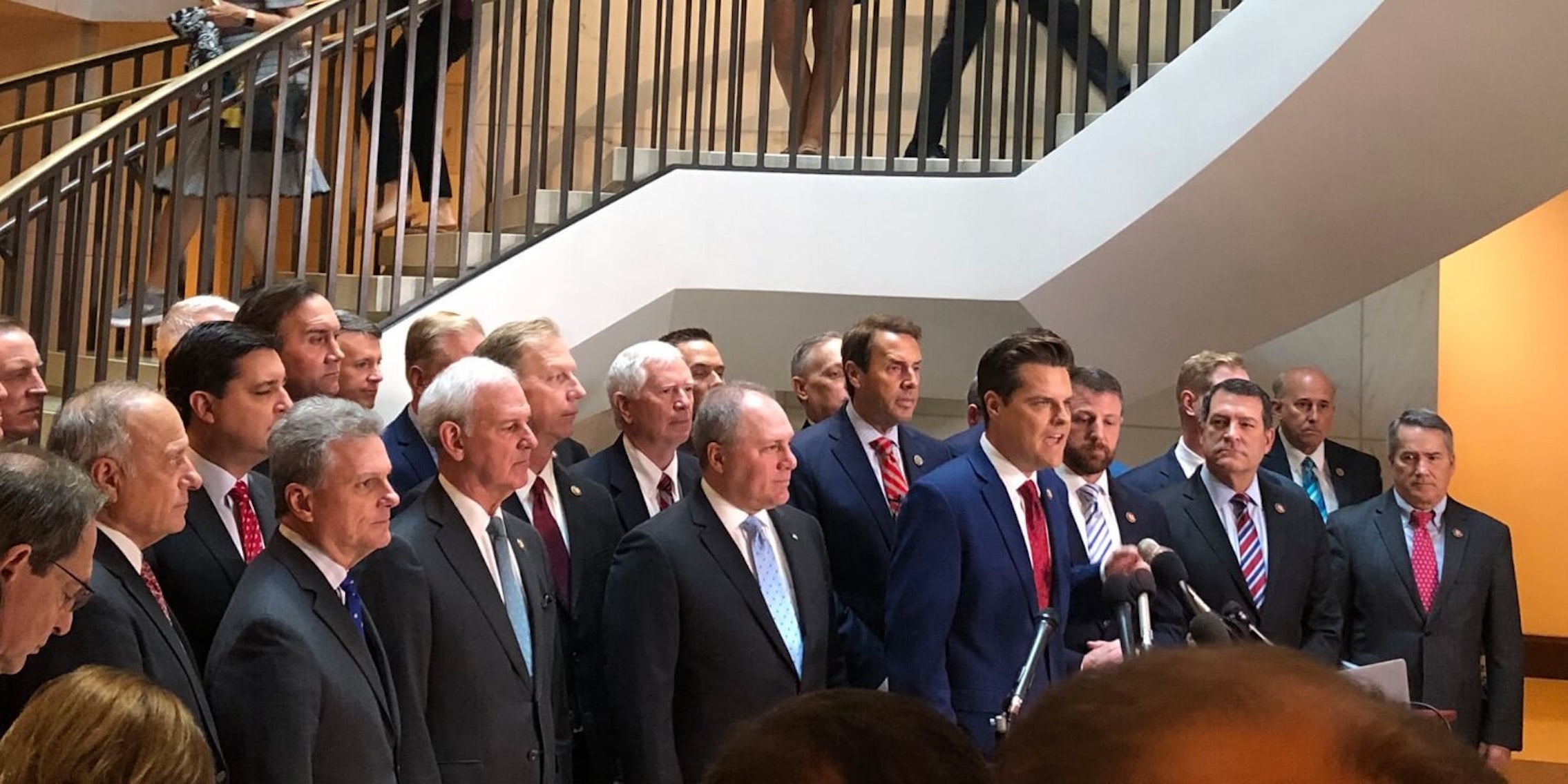 He's trying to invade a secure facility in Congress.

Due to the sensitive nature of some information and testimony, House Democrats made the decision to hold hearings into President Donald Trump’s conduct on Ukraine with the House Intelligence Committee and keep them classified from the public.

Whether that is the right decision for hearings that could wind up with the removal of the president is up for debate. What isn’t though is the fact that Republicans are definitely involved. The House Intelligence Committee has nine Republican members, all of whom are free to attend hearings surrounding the investigation.

But that isn’t good enough for Rep. Matt Gaetz (R-Fla.), perhaps the biggest Trump defender in all of Congress. He has been upset at being left out of the inquiry, and today announced he was leading a charge to storm the Secure Compartmentalized Intelligence Facility (SCIF) where the hearings are being held.

Matt Gaetz says he’s about to lead this phalanx of House Republicans into the SCIF to check out what’s going on with the whole impeachment thing pic.twitter.com/iFyxqMgcsr

His army of elderly white Republican men at his side quickly became the subject of mockery.

this picture just told me that women aren’t funny https://t.co/XWuq4zAgjz

Such uniformity in that phalanx! https://t.co/Voy792uBhU

A shockingly lovely photo here. The angelic woman looking over all the men with the halo around her. https://t.co/q5jToqSATo

It appears Matt was unable to recruit a single woman to this effort. https://t.co/qoxG0DRxW7

Everything is always so embarrassing https://t.co/qFfOGEZ1EI

How Republicans ask for a manager at Burger King. https://t.co/JdeDHmI2TI

According to Andrew Desiderio, Politico‘s congressional reporter, Gaetz was successful in storming the SCIF but may have compromised it by bringing in cell phones.

NEWS: Source tells me that after House Republicans tried flooding the SCIF with non-committee members, “many brought their cell phones too into the classified area.”

“Stand off in progress,” source adds.

Laura Cooper’s deposition is currently on hold while Republicans remain inside the SCIF apparently trying to negotiate a settlement with Schiff.

Source tells me the SCIF is now being swept because of the cell phone violations.