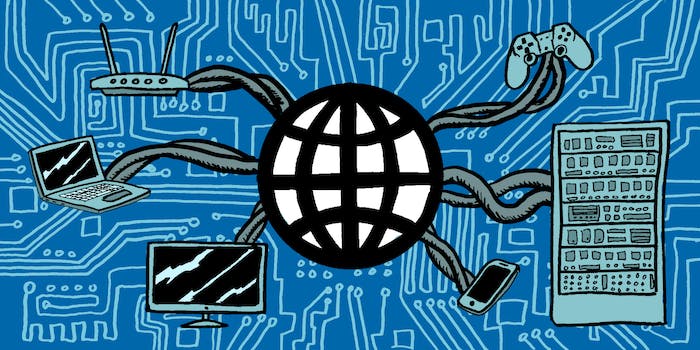 It really is a series of tubes.

Most of us know how to use the internet without having any idea how it actually works. In fact, over 5,000 domain names are registered every hour, and over 250 billion emails are sent every day. But how those websites load on screens or how those emails appear in our inboxes seems like magic. Though we at Daily Dot do feel that the internet is magical (see: this dog with a human face), understanding how it works is pretty simple.

What is the internet?

The internet actually stands for “internetworking,” and it represents how all telecommunication networks allow anyone the possibility to communicate with anyone else.

Another way to describe the internet is as a “network of networks” that carry information between them. “The information superhighway” isn’t a bad analogy, either. Because of these definitions, most people believe that the internet is a concept or intangible. That’s mostly true. Milton Mueller, a Syracuse professor who runs internetgovernance.org, defined the internet in this 2014 Time article as “more of a process than a thing.”

But Tony Li, the engineer who created routing protocols that enable the internet, argues that the current state of the internet involves both physical and metaphysical components. When asked on Quora, he answered,“Yes, the Internet physically exists. It is a set: it is the union of many diverse components. Yes, those components are individually owned and operated by their respective Autonomous Systems. But the fact that they are functionally devoted to forming the Internet is undisputable.” Li gives examples such as data centers, fiber, coax cables, and routers, and he offered to “drop a core router” on the foot of anyone who doubts its physical presence.

There are even wires in the ocean, and they’re actually incredible. Submarine communications cables are installed by special boats, and they range from the width of a soda can to the width of a magic marker. They’re hundreds of thousands of miles long and cost hundreds of millions of dollars. International disruptions in internet service have been caused by boats merely cutting them.

The most important thing you can take away from this: The internet is not in the sky or in the clouds. It’s here on Earth, and you can even see it.

How does the internet work?

You may remember in 2006 when now-deceased Republican Sen. Ted Stevens referred to the internet as “a series of tubes” when arguing against net neutrality. Many mocked Stevens at the time, but he wasn’t completely wrong. Though most people connect to the internet wirelessly, that connection always goes back to a wire. Yes, even if you connect to the internet via Wi-Fi, that connection goes back to a router. Routers are connected to cable networks. On a smartphone, the wireless signal connects to a cell tower, which is also wired to a cable network. Whether the cables are fiber optic or copper, connected underneath the ground or hung from utility poles, the internet is connected by a web of wires. Or, “a series of tubes.”

In the internet world, there are “servers” and there are “clients.” Servers are machines that provide services to other machines and are connected directly to the internet. There are email servers, web servers, and data servers, and each has a static IP (internet protocol) address that doesn’t change. IP addresses help computers find each other. The Daily Dot’s main IP address is 104.17.157.154, but instead of calling the site 104.17.157.154, we refer to it as www.dailydot.com.

Your home laptop is not a server. It’s a client because it’s connected indirectly to the internet through an internet service provider (or ISP), like Comcast, Verizon, or Google Fiber. To connect to the internet, I connect to my Wi-Fi, which is provided by an ISP. That ISP connects me to the internet, which connects me to the IP of the server whose data I wish to see (like Google.com). Web pages and emails are files on that server’s hard drive, so I’m really looking at files on Google’s hard drive.

How does information know where to go?

Whenever an image, file, or message is sent across the internet, computers break the information into smaller segments, called “packets.” Packets are reassembled in their original order once they are received by the server.

To ensure that information goes to the right place, servers look to send files to an IP address. As a client, your IP address changes depending on where you are and how you connected to the internet. IP addresses can also be used by ISPs to determine the perpetrators of illegal activity. For example, I once worked a temp job at an office where Comcast called daily to let me know that someone on our floor was illegally torrenting episodes of Top Chef. Finally, I asked Comcast which IP address was doing the deed, and I was able to figure out the culprit based on IT information about which computer connected to which IP address. (I’m no snitch, though. I gave my coworker a heads up, to which she responded, “They can see our IPs?” Yes, they can.)

If you’ve ever had to pay $175 to “rent” a router from an ISP, then schlep across three boroughs to return it, you’ve had to wonder, “What even is this thing?” A router is needed anywhere two or more devices intersect to connect with an ISP. Routers direct the packets across the internet, helping them reach their destinations. Every time you visit a website anywhere from ten to fifteen routers help your packets get to and from your computer.

How do computers connect to Wi-Fi?

Wifi works similarly to Bluetooth technology by using radio frequencies to transmit signals between devices. If a computer has Wi-Fi capability, it connects by receiving signals from your wireless router over the Gigahertz range. By the way, Wi-Fi stands for Wireless Fidelity and is a synonym for WLAN (wireless local area network).

Who owns the internet?

The answer is no one. Though basically everyone “pays” for the internet in one way or another (through ISP subscriptions, by viewing content on webpages), there is no one body that owns it all. So, when you buy a domain name, you are simply paying for a part of the infrastructure of the internet.