Does this dog have the face of a man? Decide for yourself.

Part of the appeal of owning a dog is how human they seem at times. They certainly feel love and affection like people do, and their goofy antics often remind us of ourselves.

But there’s one dog who takes things a step further. His name is Yogi, but instead of looking like a bear, people think he has the face of a human man.

Here’s Yogi side by side with his adopted sister, who, as you can see, just looks like a dog. 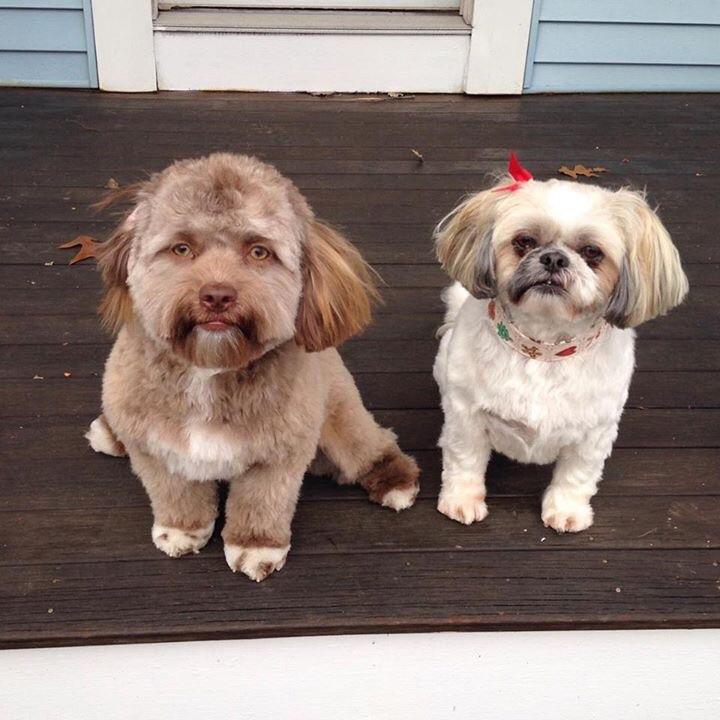 Clearly Yogi is a human in a dog body. If you have any doubts about it, here he is giving his human
Chantal Desjardins a knowing wink.

Desjardins, told BuzzFeed that she’d “never really noticed” that Yogi had a human-like face, until people started commenting on it on Facebook. Then when a “Friend’s girlfriend’s brother” posted a picture to Reddit, along with the title “A friend of a friend posted a pic on Facebook of her dog. It looks like it has a man’s face.” Yogi became a viral sensation.

Posted one commenter: “he has the most human eyes I’ve seen on a dog.”

“But it’s not just his eyes,” said another. “Look at that little grimace smile that can only come from a middle-aged man who’s soul has been given to corporate.”

Some thought the photo could have been a classic Instagram face swap. On Twitter, Sian Welby suggested she knew who the dog most resembled.

SOMEONE GET A DNA TEST STAT pic.twitter.com/ccDesVPXI0

“My friends were freaking out,” Desjardins said of Yogi’s pictures, which she added were “not photoshopped at all.”

Despite his stolid appearance, Desjardins says Yogi is actually a “hyper puppy” who “always wants to cuddle and play.”

But perhaps that’s just because he escaped his life as a corporate drone only to be reincarnated as a beloved pup who gets to spend his days being petted and taking naps. It’s certainly possible, although if that is the case, Yogi is smart enough to keep it a secret.