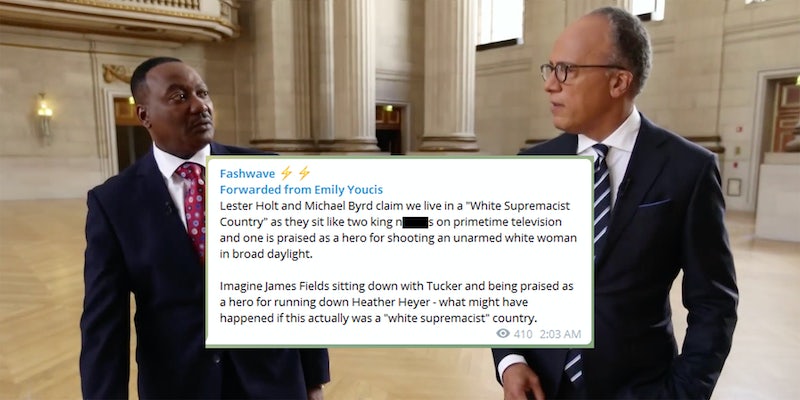 The mask is off.

The police officer who killed Ashli Babbitt during the Capitol riot has broken his silence. Thursday night, Capitol Police Lieutenant Michael Byrd sat down with NBC’s Lester Holt for an exclusive interview about the shooting, which has been deemed justified.

Many on the far-right insist they’re not racist. But responses to Byrd’s interview on Telegram show otherwise. Dozens of messages from some large far-right channels refer to Byrd, a Black man, with racial slurs, while also accusing him of murder, terrorism, and the like.

On Jan. 6, Babbitt, a white, female QAnon follower, was among those who breached the Capitol in the failed insurrection attempt. Video of the shooting reviewed by the Daily Dot at the time showed her ignoring Byrd’s commands to retreat. He then shot her as she approached.

Byrd told Holt that shooting was a “last resort.”

“I hoped and prayed no one tried to enter through those doors. But their failure to comply required me to take the appropriate action to save the lives of members of Congress and myself,” he said.

Four others perished during the riot that day. More than 100 police officers were injured. Videos showed the crowd beating and terrorizing overwhelmed officers as they tried to defend the Capitol and Congress from a mob that’d erected a scaffold outside, presumably for hanging lawmakers.

Yet to hear the far-right describe it—including groups that organized and participated in the violence—it was just a peaceful protest by people more appropriately described as “tourists” than “rioters.” In their eyes, Babbitt is alternately deemed an innocent victim and a martyr.

Byrd’s interview has reinvigorated such claims.

One widely-circulated post by the Emily Youcis Telegram channel refers to Byrd and Holt by the N-word and compared Byrd to the man who killed anti-racist protester Heather Heyer during the Unite the Right rally in 2017.

The Western Chauvinist channel promised its 50,000 subscribers, “There will be a time when [Byrd] has to account for his actions, one day soon.” The same post said it was “an atrocity” that Byrd got “to kill an unarmed white woman and walk around unbothered” and claimed that he did a “coached interview” for “Jew propaganda.”

The far-right website Murder the Media called Byrd an “executioner.” (“Murder the media” was scratched into a door inside the Capitol during the riot.)

Several said that they no longer support the police.

“Throw your Blue Lives Matter flag in the trash,” the Mike Peinovich channel wrote. “It was always a pathetic cope anyway.”

Byrd told NBC that he had spent time in hiding since the shooting, and has received death threats and been subjected to other abuse.