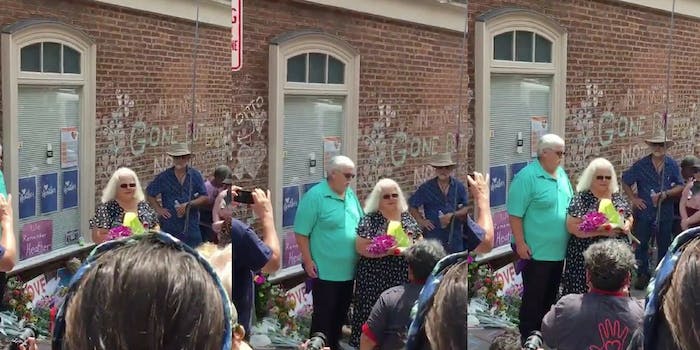 'I hope no other mother has to go what I went through.'

On Aug. 12, 2017, Heather Heyer died after a car drove into her group of counter-protesters who were marching against white nationalism and supremacy in Charlottesville, Virginia, for the “Unite the Right” rally.

One year later, Susan Bro spoke at the memorial of her daughter Heather’s death.

Speaking on the street where Heyer was killed, which Charlottesville has since renamed in Heyer’s honor, Bro told those present that she wanted the weekend’s demonstrations to reflect upon all the other people who had been injured at the rally and car accident, not just her daughter, the Cavalier Daily reported. Bro also dedicated two roses to the state troopers who died that day last year.

“Oh my dear heavens, there were so many people who were wounded that day,” Bro said. “People who are suffering—injured. There is so much healing to do.”

Heather Heyer’s mother at memorial:”I hope no other mother has to go what I went through.” pic.twitter.com/91lujTGtRe

Using the hashtag #HeatherHeyer, attendees of Bro’s speech and viewers of the memorial shared photos of the mural and accompanying signs and flowers, all symbolizing Heyer’s continued presence within the effort to fight white supremacy. Meanwhile, in Washington, D.C., white nationalists and white supremacists had planned to gather for a “Unite the Right 2” rally, but the event dissipated in a whimper as few showed up and they were overshadowed by counter-protesters.

One year since the riots in Charlottesville and one year since Heather Heyer was killed by a white supremacist. While I was happy to see that the counter protestors outnumbered the awful neo Nazis in DC today, we shouldn't even have to do that. Trump's administration has made this possible and more acceptable for this kind of hate to be expressed. Not to say it didn't exist before because it has. It always has and we always must stand against it and be allies for those who need it. #charlottesville #heatherheyer #remember #fightnazis #fightwhitesupremacy

"No more hate." I took this photo in Charlottesville when I was there this past February. It had been 6 months but the community was still reeling from what had happened there. While I'm glad so many are protesting white supremacy today, it makes me sick that we're still protesting hate, that hate is not only still present but is the established rhetoric of our current government. #lovetrumpshate #resist #rawtruth #heatherheyer #nomorehate #wearebetterthanthis #hateistoogreataburdentobear #augustbreak2018

Following Heyer’s death, Bro created the Heather Heyer Foundation, which gives scholarships and works with social justice-related groups and causes. In a recent interview with the Atlantic, Bro said the foundation was created as a result of the funds collected in Heyer’s name and offers scholarships for social activists graduating from Charlottesville High School and Heyer’s former high school. Bro continues to hide Heyer’s grave from well-wishers and potential vandals, keeping the street she died on, Fourth Street, the public memorial.

The man who drove into the crowd, a participant of the white nationalist rally, has since been charged with first-degree murder along with multiple federal hate crime charges, bringing his total charges to 30. He has pleaded not guilty.

Heyer’s memorial ended with a song, community members hugging Bro after she finished her speech.