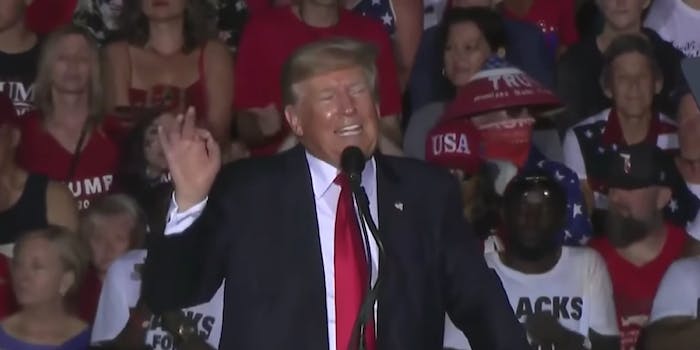 Conservatives are calling on former President Donald Trump to say the name of a police officer who they claim shot and killed Ashli Babbitt.

A 35-year-old follower of the QAnon conspiracy theory who breached the Capitol during the Jan. 6 riot, Babbitt lost her life after attempting to climb through a barricade set up by Capitol Hill police to protect fleeing lawmakers.

Although an investigation by the Department of Justice (DOJ) cleared the officer of wrongdoing, conservatives have cast Babbitt as an innocent bystander unjustly “executed” by the state. Much to the ire of conservative lawmakers, the DOJ has also declined to release the name of the officer.

But the long-simmering issue exploded last week after Trump released a statement demanding that the officer’s identity be made public. Rep. Paul Gosar (R-Arizona) on Tuesday appeared to follow Trump’s lead by releasing a similar statement as well.

“Six months ago today, Ashli Babbitt, a 110-pound woman with nothing in her hands, not a rock, not a stick or a bat, was shot dead by a still unknown Capitol Hill police officer,” the press release states. “And now President Trump has joined me in seeking the truth.”

While it’s unclear whether Trump or Gosar currently know the officer’s identity and are merely declining to say, the former president’s supporters believe they know who shot Babbitt.

Social media has since been flooded with the alleged officer’s name as well as requests for Trump to publicly state it aloud. So far, Trump has not obliged. The Daily Dot is declining to include the officer’s name, as it has not been corroborated.

The only question that remains is whether Trump, who was previously criticized by his supporters for not commenting on Babbitt’s death, is merely weighing in on the issue now in an attempt to quell their anger.