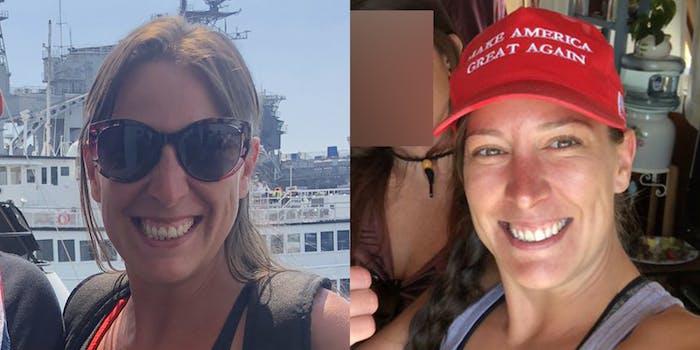 Woman shot and killed during Capitol riot was a QAnon supporter

In the days leading up to yesterday’s U.S. Capitol riot, the woman shot and killed during the mayhem expressed fervent support for the QAnon conspiracy theory movement on social media, tweeting and retweeting several messages suggesting that Democrats would face a reckoning when it came time to certify President-elect Joe Biden’s Electoral College votes in Congress.

Ashli Babbitt, a 35-year-old woman identified as an Air Force veteran by the Washington Post, was one of hundreds of Trump supporters who stormed the Capitol on Wednesday, breaking into the House Chamber and leaving shattered windows in their wake.

Amid the bedlam, a gunshot hit Babbitt, and she was seen hitting the Capitol floor and bleeding from her shoulder. She died later that day.

Babbitt expressed a myriad of pro-Trump sentiments on Twitter, echoing his unsubstantiated claims of voter fraud and retweeting several messages that contained the #StopTheSteal hashtag.

On Sept. 7, Babbitt tweeted a photo of herself attending a Trump boat parade in San Diego. She can be seen wearing a shirt that says “We Are Q,” and her tweet includes the QAnon rallying cry “WWG1WGA,” which stands for “where we go one, we go all.”

Babbitt’s last original tweet came on Jan. 1, when she quote-tweeted an account that asked, “When do we start winning???” and responded, “Jan. 6. 2021,” in an apparent reference to the Capitol riot.

One of Babbitt’s final posts came on Jan. 5, when she responded to another pro-Trump Twitter user who complained that “a lot of flights into DC are being cancelled with no bad weather” and lamented that “the entire world is corrupt.”

“Nothing will stop us….they can try and try and try but the storm is here and it is descending upon DC in less than 24 hours….dark to light!” Babbitt replied.

She was ostensibly referring to “The Storm,” which QAnon supporters believe to be the day of reckoning when Trump will take down the cabal of Satan-worshipping pedophiles conspiring against him and thousands of arrests will be made. The Storm was originally forecast for October and November 2017.

Over the past day, thousands of Twitter users have shared Babbitt’s final messages with a mixture of sorrow, anger, and schadenfreude.

“I feel such a mix of emotions about this needless loss, but mostly its sorrow for her family, and anger at the months of reckless lies led this regular-seeming woman to give her life for something (and someone) so embarrassing,” writer and therapist Josh Weed tweeted.