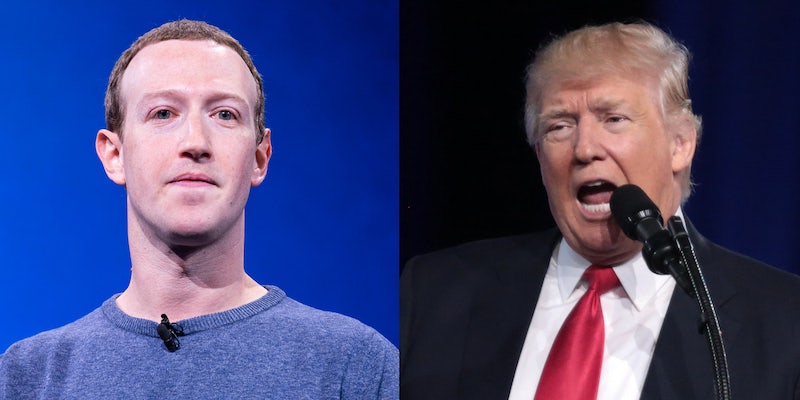 Zuckerberg said the 'risks of allowing the president to continue to use our service during this period are simply too great.'

Facebook CEO Mark Zuckerberg said the social media giant would continue its block of President Donald Trump “indefinitely” following his posts in the wake of the storming of the U.S. Capitol by his supporters on Wednesday.

Zuckerberg made the announcement in a Facebook post on Thursday morning. In it, he said the “risks of allowing the president to continue to use our service during this period are simply too great.” Zuckerberg said the ban will extend at least until Inauguration Day.

“The shocking events of the last 24 hours clearly demonstrate that President Donald Trump intends to use his remaining time in office to undermine the peaceful and lawful transition of power to his elected successor, Joe Biden,” Zuckerberg wrote in the post, later adding: “Therefore, we are extending the block we have placed on his Facebook and Instagram accounts indefinitely and for at least the next two weeks until the peaceful transition of power is complete.”

Social media giants like Facebook and Twitter faced pressure amid the chaos on Wednesday to suspend Trump’s accounts. His supporters stormed the U.S. Capitol after the president spoke to them at a rally nearby and were eventually able to get inside, ransacking offices and breaking windows.

On Wednesday, Twitter locked Trump’s account, which he uses prolifically, for at least 12 hours after he removed posts supporting the rioters. One of the posts was a video where he called his supporters “very special” and added “we love you.”

The company said Trump’s tweets were “repeated and severe violations” of its civic integrity policy.

For months before the riot at the Capitol, Facebook had received criticism for its lax moderation policy surrounding the president. Some of its employees have also pushed back on its hands-off approach to the president.

Zuckerberg appeared to address that criticism in his post on Thursday.

“Over the last several years, we have allowed President Trump to use our platform consistent with our own rules, at times removing content or labeling his posts when they violate our policies. We did this because we believe that the public has a right to the broadest possible access to political speech, even controversial speech,” Zuckerberg wrote. “But the current context is now fundamentally different, involving use of our platform to incite violent insurrection against a democratically elected government.”