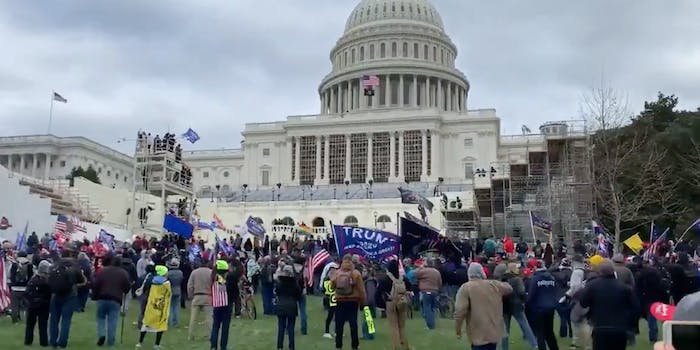 There are reports of Trump supporters getting inside the Capitol building.

Washington, D.C. descended into chaos on Wednesday as supporters of President Donald Trump stormed the U.S. Capitol building and eventually were able to get inside.

Thousands of Trump’s most ardent followers, who had just finished listening to the president’s speech at the “Save America Rally,” began clashing with law enforcement as Congress met to count the electoral votes.

Trump supporters have convinced themselves, thanks to countless conspiracy theories online, that the president would serve a second term.

But as the reality began to set in that President-elect Joe Biden would indeed be the next commander-in-chief, Trump loyalists attempted to storm the U.S. Capitol building.

Footage from on the ground indicates that Trump’s supporters tore down numerous barricades before being met by police.

The crowd, which drastically outnumbered law enforcement, was repeatedly hit with pepper spray to little effect.

Police attempted to reestablish the barricades while fighting off the angry gathering. The president’s supporters could be heard shouting “traitor” to police on scene.

At one point police could even be seen retreating as the crowd size became too overwhelming.

“Whoa: Trump supporters going at it with the police on the steps of the Capitol as Congress counts the Electoral College ballots inside,” @Phil_Lewis_ tweeted.

The president’s supporters were also seen climbing a large tower, urging the group to “move forward” as fireworks and other objects were hurled at police.

The protesters eventually made their way inside the Capitol building, where police attempted to keep them out of the Senate chamber.

The chaos came just as Vice President Mike Pence had released a letter indicating that he did not have the authority to intervene in the electoral process.

The mayhem ultimately led some legislators to seek shelter over apparent fears that they would be harmed by the crowd. The Library of Congress, which sits across the street from the Capitol building, was also evacuated.

In emerging videos, Capitol police were shown brawling with Trump supporters and pulling guns out in the chamber.

In one image, a protester was seeing standing at the podium in the U.S. House of Representatives.

Trump, who whipped the crowd into a frenzy by repeating countless debunked claims about voter fraud, tweeted angrily at Pence in the wake of the chaos before asking his supporters to respect Capitol Police.

A woman was reportedly shot in either the neck or chest by police inside the Capitol as rioters attempted to breach the Senate chambers. According to D.C. police, she passed away several hours later.

Explosive devices were also reportedly found by police, according to the New York Times. One of the devices, said to be a pipebomb, was reportedly located inside the Republican National Committee building. A suspicious package was also being investigated at the Democratic National Committee headquarters.

Chief Pentagon spokesman Jonathan Hoffman, according to CNBC, ordered the deployment of 1,100 members of the National Guard to quell the unrest.

This is a breaking news article and will be updated.