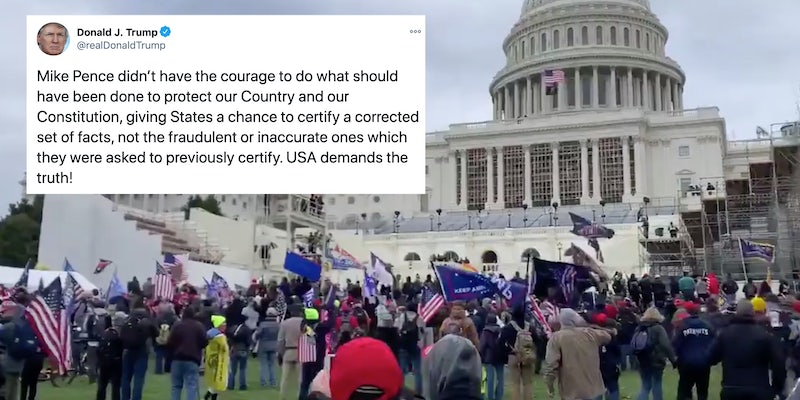 A lot of people are calling on the social media platform to take down Trump's account.

As supporters of President Donald Trump stormed and broke into the U.S. Capitol, many people online are calling on Twitter to suspend the president’s account.

On Wednesday afternoon, supporters of the president left a rally where Trump spoke and headed to the Capitol building where lawmakers were counting the Electoral College votes.

In his rally, Trump urged them down Pennsylvania Avenue to the Capitol

As they reached Congress, the president’s supporters pushed back police and went through several barricades. Some supporters were also able to get inside the building. The building and the surrounding area have been put on lockdown.

Trump tweeted about his anger over Vice President Mike Pence intervening in the electoral counting process before addressing the chaos unfolding at the Capitol building, although not denouncing it.

Nearly an hour later, the president again tweeted, this time saying he wanted his supporters who stormed the Capitol to “remain peaceful.”

Given Trump’s prolific use of Twitter—and encouraging the march toward the building at the rally just minutes before his supporters did just that, a number of people online began calling for the social media company to suspend the president’s personal account.

“@jack @Twitter @TwitterSafety As someone who has served on your Trust and Safety Board since its inception and counseled you since 2009, time is now to suspend President Trump’s account. He has deliberately incited violence, causing mayhem with his lies and threats,” Danielle Citron, a University of Virginia School of Law professor and member of Twitter’s trust and safety council, tweeted.

Many other people shared the same sentiment as Citron.

The Anti-Defamation League also called on all social media companies to suspend the president’s accounts, saying that the situation at the Capitol was “a direct result of the fear and disinformation that has been spewed consistently from the Oval Office.”

“President Trump has a responsibility to call for an end to this violence and unrest that he has sowed. His campaign of disinformation is a clear and present danger to our democracy. But until such time as that happens, social media companies should suspend his accounts ASAP as they would do for anyone else advocating disinformation and promoting violence. It’s time,” the ADL said in a statement.