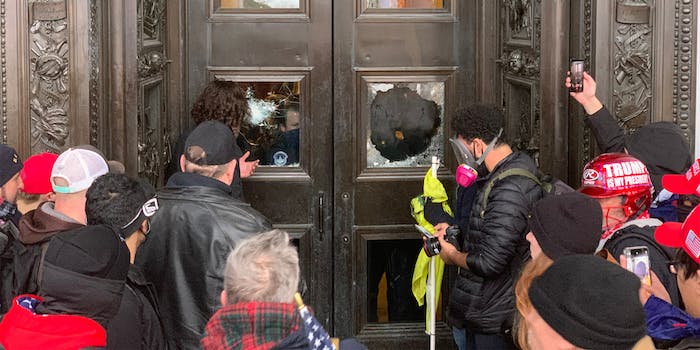 Many rioters broke into the Capitol and left without repercussions.

One of the many shocking things about the U.S. Capitol attack was the obvious lack of fear among the rioters. Many were happy to show their faces on camera, photographed breaking into the House chamber and Nancy Pelosi’s office or trashing media equipment outside. Footage from Wednesday evening shows people wandering around the Capitol without masks, talking to live-streamers and giving interviews without bothering to disguise their identities. They clearly did not fear legal repercussions.

While D.C. police are being criticized for failing to prevent mob violence, the FBI is now trying to identify people who broke into the Capitol or incited violence elsewhere.

“The FBI is seeking information that will assist in identifying individuals who are actively instigating violence in Washington, DC,” the agency announced on its website, inviting people to submit tips, photos, and footage through an online form.

Plenty of the most viral images from Wednesday’s protests include easily identifiable photos of people committing crimes, such as pictures of a man breaking into Pelosi’s office, stealing a piece of mail, and walking out of the building without any visible pushback from law enforcement:

He has since been identified as a 60-year-old Arkansas man named Richard “Bigo” Barnett.

And of course, some of the most widely-circulated photos included the “QAnon shaman,” a man named Jake Angeli who is instantly recognizable thanks to his faux-Indigenous headdress, face paint and habitual shirtlessness. He’s a prominent figure in the QAnon conspiracy theory movement, and was photographed atop the dais in the House of Representatives, where elected officials had recently fled in fear of physical attacks.

Individuals like Angeli, Fuentes, and Baked Alaska were easy to spot if you have any familiarity with QAnon or neo-Nazi movements. However, there are also numerous photos and videos of unidentified rioters like the man wearing a “Camp Auschwitz” sweatshirt, happily posing in the Capitol building without a mask.

Yesterday’s riot stood in stark contrast with last summer’s Black Lives Matter protests, where protesters wore masks and safety gear to protect against police reprisals. Wednesday’s rioters seemed unconcerned about the possibility of arrest or police violence, receiving tacit support from the President Donald Trump—and in some cases being let through the barricades by police. One viral video shows a rioter taking a selfie with a cop while storming the Capitol, and only 52 people were arrested in total.

D.C. police allowed hundreds of people to walk free after ransacking the House of Representatives and its adjoining offices. The question now is whether the FBI will follow up with a more effective attempt to curb the violence.