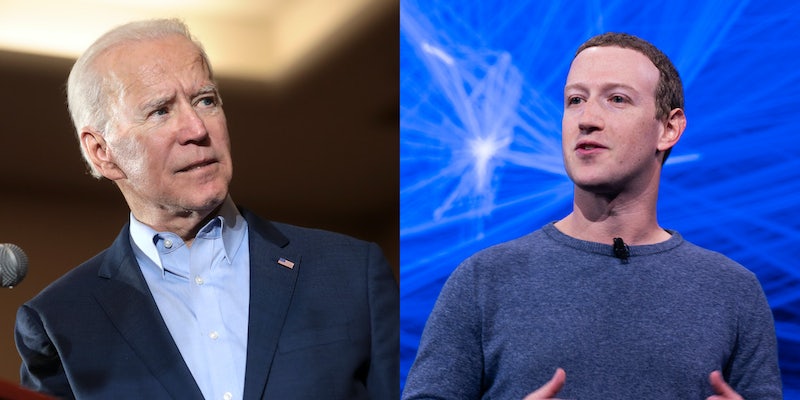 Biden says Facebook has ‘failed’ at limiting disinformation ahead of election

This is not the first time Biden's camp has criticized the social media giant.

The Democratic presidential nominee’s campaign sent a letter to Facebook CEO Mark Zuckerberg on Monday, which was first published by Axios. This is not the first time Biden’s camp has criticized the social media giant, nor is it the first time Facebook has taken heat for its lax approach to moderating content from the president.

The letter notes that Facebook said it would work to fight misinformation as the election gets closer. But since then, the Biden team says it has “seen regression” rather than “progress” by the social media giant.

“Facebook’s continued promise of future action is serving as nothing more than an excuse for inaction,” the letter reads. “Millions of people are voting. Meanwhile, your platform is the nation’s foremost propagator of disinformation about the voting process. This state of affairs cannot be reconciled with a single public statement your company has made about these issues.”

The letter blasts Facebook’s labels on election posts as being in a place where “many viewers will miss it” and says the social media giant should remove posts by the president that violate its policies against election information, such as encouraging his supporters to vote twice.

The Biden campaign’s gripes with Facebook echo long-running criticisms the platform has faced during the election cycle. The company’s ad policy has been criticized because it allows politicians to put anything in their ads, even if the information is false.

In response to the ad criticism, Facebook announced that it would ban political ads for the week running up to the election—albeit with some loopholes—and would ban any ads that prematurely declare victory before the results of the election are certified.

With the expected massive increase of mail-in ballots because of the coronavirus pandemic, it is possible an election victory will not be certified on election night.

Axios published all of Biden’s letter to Facebook. You can read it here.