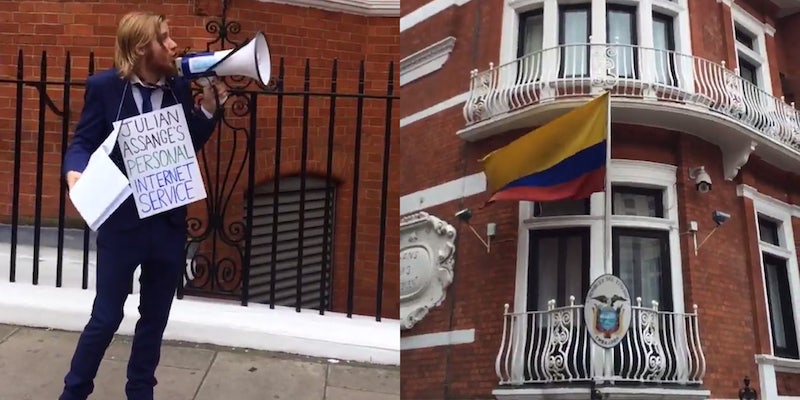 This comedian is reading the internet to WikiLeaks’ Julian Assange

After having his internet cut off this week, Julian Assange is back online. Well, kind of…

A day after the Ecuadorian government confirmed in an official statement that it had removed Julian Assange’s internet access, it appears that the connection has been restored in the form of Canadian comedian Bobby Mair.

Stationed outside Ecuador’s embassy in London, where the Wikileaks’ founder has been living for the past four years, Mair stepped in this morning as a self-described ‘personal internet service.’

I'm outside the Ecuadorian Embassy about to read the Internet to @wikileaks Julian Assange pic.twitter.com/1jUbp6y6tL

Wielding a megaphone, the comedian has been keeping Assange up to speed by reading the internet to him.

It appears that the stunt was being filmed for Mair’s weekly segment on Sam Delaney’s News Thing, a topical comedy show produced by news network Russia Today.

After much speculation early this week, it emerged that it had been the Ecuadorian government who had acted to cut off Assange’s internet connection. A statement released by the government on Tuesday explained that they had done so in response to the publishing of Democrat email dumps on Wikileaks, including thousands of emails stolen from Democratic nominee Hillary Clinton‘s campaign chairman, John Podesta. Ecuadorian officials had perceived this as an attempt to influence the U.S election.

The statement described the black-out as a temporary measure and reaffirmed the asylum granted to Julian Assange in 2012.

So far, Assange has not commented on Mair’s attempt to come to his rescue—not even to complain about the awful bandwidth speed.