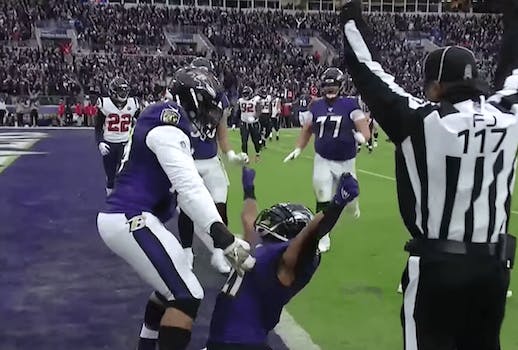 Monday Night Football: How to stream Ravens vs. Rams live

A surging Ravens team will look to knock off a stumbling Rams offense.

After finishing last season with a Super Bowl trip, the Rams have only stumbled since failing to hoist the  Lombardi Trophy. Their two most recent games, a loss to a Steelers team with an awful offense and an unconvincing win over the hapless Bears, marks the low point of a long slide. It’s getting harder and harder to imagine Jared Goff taking his team back to the promised land.

The Ravens, by contrast, are starting to feel unstoppable. Since Lamar Jackson and company took down the unbeaten Patriots three weeks ago, they have demolished the Bengals and the Texans, winning both games by more than 30 points. No team seems to have an answer for Jackson. What’s more, the Ravens defense is steadily improving as well. Baltimore is starting to look like the favorite out of the AFC to reach the Super Bowl.

This matchup comes at a tough time for the Rams, who really need to win games to keep their postseason hopes alive. Another loss or two will put them out of playoff contention in the competitive NFC. Here’s everything you need to know to live stream Ravens vs. Rams, including what to watch for on the field.

Ravens vs. Rams live stream: How to watch MNF online

But AirTV—which has no monthly fee—serves to strengthen one of Sling’s biggest weaknesses compared to other live streaming services like Hulu with Live TV and YouTube TV. Those services have plenty of local channels. While select NFL and college football games (on Fox, FS1, and FS2) are no longer on Sling, you can still catch Fox games with AirTV.

Baltimore Ravens vs. Los Angeles Rams: What to watch for

If only the Rams could have had last year’s offense and this year’s defense. The fourth-ranked Rams D is having a great year, with a dominant Aaron Donald leading the unit. Unfortunately, the offense has sunk to 21st in the league in Offensive DVOA.

No aspect of the LA offense looks quite as good as it did last year. Todd Gurley hasn’t been able to run as well as he did in past seasons. Jared Goff makes bad mistakes in the passing game and doesn’t put up the kind of yardage he did a year ago. So much of Goff’s success was about having Brandin Cooks and Cooper Kupp both healthy and that hasn’t happened often lately. Things just aren’t clicking for this unit.

If the offense plays poorly, then it doesn’t really matter how good the defense is. While Aaron Donald, Jalen Ramsey, and Dante Fowler are leading a strong D, you have to score a lot of points to win games in the crowded NFC.

The Rams have been pretty good against the run this year, but so far this season, even teams that are great against rushers haven’t been abler to contain the Ravens. The one-two punch of quarterback Lamar Jackson and running back Mark Ingram have been too much for most teams to handle.

As if this weren’t enough, in recent weeks, tight ends Hayden Hurst and Mark Andrews have added another lethal dimension to the Ravens offense.

Baltimore’s defense isn’t a top unit, but they keep improving. The Ravens linebacking corps had a great game against the Texans, with numerous LBs recording sacks. The run defense is also coming into its own as the season goes on. This defense may not end the year in the top five, but they just need to be good enough to keep this team winning.

Unless we see a real change of pace from the Rams offense, look for the Ravens to win here. Yes, LA’s defense is good, but the Ravens have made quick work of good defenses before. It’s Lamar Jackson’s world right now and we’re all just living in it.