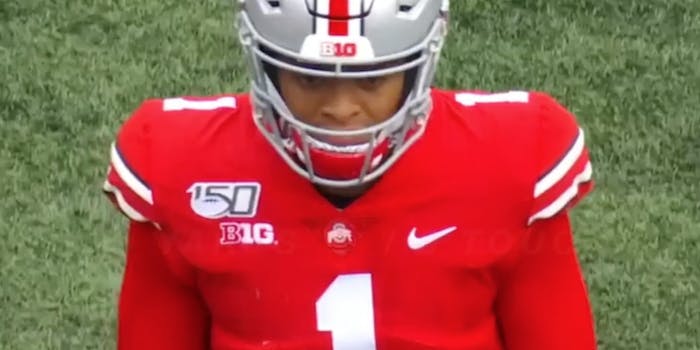 How to stream Ohio State vs. Michigan State

Can Michigan State take any options away from Ohio State star Justin Fields?

The No. 25 Michigan State Spartans will face star QB Justin Fields and the No. 4 ranked Ohio State Buckeyes at Ohio Stadium in Columbus, for positioning in the Big 10 standings.

The reality here is that for Michigan State to be within hailing distance of the Buckeyes, they will have to completely take away an option for Heisman candidate/quarterback Justin Fields, and it’ll still be dicey. Michigan State isn’t a bad team by any stretch. They’ve scored 31.4 points a game, with tremendous balance. They’ve only given up 15 points a game so far this season, allowing less than 260 total yards a game.

That’s all well and good, but Ohio State will be another beast entirely.

The problem is that the Buckeyes simply does what it wants, however it desires. Michigan State will have to pick its poison. Fields lead an overwhelming offense coming into the matchup scoring 52.4 points a game, behind 254 passing yards and an eye-popping 282 yards a game on the ground. Running back J.K. Dobbins is averaging 8.4 yards a rush. This isn’t an option-heavy team – Fields & Co. are pushing people around with spread looks, transitioning speed and precision into power blocking. Heading up a stifling defense, edge rusher and future first-round draft pick Chase Young has been virtually unblockable.

No. 4 Ohio State Buckeyes vs. No. 25 Michigan State Spartans

Ohio State vs. Michigan State: What to watch for

The Buckeyes start fast. The Spartans start very slow. These facts alone, on top of the obvious difference in talent in all three phases of the game, suggest Ohio State gets out in an all-out sprint. Michigan State, if it has its choice, should force Fields into passing the football however it can. Stopping either Dobbins or talented backfield mate Master Teague will be another issue entirely.

Ohio State is being picked to soundly beat the Spartans by 20, according to Odds Shark. Sports Chat Place also picks the Buckeyes to easily cover the spread.