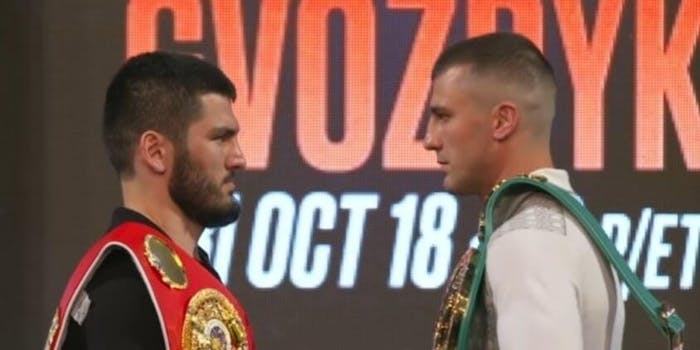 How to live stream Oleksandr Gvozdyk vs. Artur Beterbiev

It's light heavyweight champion vs. champion.

Two light heavyweight titles are on the line Friday night when Oleksandr Gvozdyk faces Artur Beterbiev in a unification boxing match you can live stream on ESPN. And considering Gvozdyk and Beterbiev are two of the best 175-pounders in the world, it’s nearly impossible to give a confident prediction on who will win the fight. But we know for sure it’ll be a high-skilled affair.

Sure, Gvozdyk, who hails from Ukraine, and the Russian-born Beterbiev aren’t well known to American audiences or, even, to many casual boxing fans. But they’re fantastic fighters with world-class skill sets who are looking to take over the division that has been wide open ever since future Hall of Famer Andre Ward retired in 2017. Hardcore boxing fans know who they are, and they’ve been salivating over this matchup since it was signed.

“This could very well be the fight of the year,” Top Rank chairman Bob Arum said in a press release when the fight was announced. “These are two evenly matched, undefeated light heavyweight champions. There is nothing better in the sport of boxing.”

Here’s everything you need to know to watch the Gvozdyk vs. Beterbiev fight.

How to watch Gvozdyk vs. Beterbiev

Gvozdyk vs. Beterbievv is the only fight that will be shown on the ESPN card, and it begins at 10pm ET. The entire undercard will be streamed on the ESPN+ streaming service beginning at 7pm ET (the fight card is listed below). Most of the major live streaming services offer ESPN, and all of the ones featured below include a free one-week trial. Meanwhile, here’s how to watch ESPN+ and what the streaming service has to offer.

This service is fantastic for those who want to watch a massive on-demand library of movies, TV shows, and original series but who also want to stream live TV on a platform with nearly 60 channels. Thanks to that kind of versatility, Hulu with Live TV is a nice option for the cord-cutter. It’s also the best way to bundle your streaming services into one place. (Here’s the complete list of Hulu Live TV channels.)

The cheapest way to watch ESPN online (and to keep watching fighters like Govzdyk and Beterbiev) is through Sling TV. The Sling Orange package is only $25 per month and it includes ESPN, ESPN2, and ESPN3, along with a bunch of other great channels. If you really enjoy sports, you might want to upgrade to Sling Orange + Blue (see photo above), for $40 per month. Sling TV is also currently offering a deal where you can subscribe for 40% off the regular price for the first month of your subscription. (Here’s a complete guide to Sling TV channels and our Sling TV review.)

If you want to watch the card directly from your gaming console, this is the best option for you. PlayStation Vue allows you to choose from four tiers of channels, but for Gvozdyk vs. Beterbiev, you can use the service’s basic package—which also includes ESPN, ESPN2, FS1, FX, Cartoon Network, and plenty more. PlayStation works with streaming devices like Roku and Amazon Fire products, but it also gets high marks for its compatibility with Kodi. You can see the full list of PlayStation Vue channels here. You can stream on up to five devices at once, and there’s also unlimited cloud DVR.

YouTube TV lets you add up to six accounts for every subscription, and all of them come with free cloud DVR. Plus, considering YouTube puts all of your favorite channels in one place, it’s fantastic for convenience. Also, if you’re a sports fan, specialty options like NBA TV and MLB Network are certainly worth considering.

To watch the entire Gvozdyk vs. Beterbiev undercard on Saturday, you’ll need to subscribe to ESPN+. Remember, though, that the main event is exclusive to the ESPN network. The channel’s subscription service costs $4.99 per month, and it functions as an extension of ESPN’s main app and website, unlocking all sorts of exclusive live sports and original series. That includes plenty of UFC action and the entire 30 for 30 series. The undercard bouts start on ESPN+ at 7pm ET.

Gvozdyk vs. Beterbiev: Why it matters

When Ward defeated Sergey Kovalev in both 2016 and 2017 and then retired, that marked the end of the Ward-dominant era at 175 pounds and seemingly showed that Kovalev, one of the scariest fighters at the time, was possibly too old to continue being considered the elite of the division. It also became apparent at the time that younger, fresher fighters like Gvozdyk, Beterbiev, and Dmitry Bivol would be the future of light heavyweight.

Though Kovalev is still around (and still winning fights), Gvozdyk and Beterbiev each hold a light heavyweight title. After Friday, one of them will hold two belts—and will be well-positioned to fight either Bivol or the Canelo Alvarez-Kovalev winner to continue unifying the division.

“My first goal was to win a light heavyweight world title. Now, I want to unify the belts, and that mission starts with Artur Beterbiev,” Gvozdyk said, via Top Rank. “This is going to be a spectacular fight, one that the fans will enjoy. The fans asked for this fight, and we will deliver. One thing I know is that I will be the unified champion.”

Gvozdyk (17-0, 14 knockouts) has certainly been impressive lately. He was involved in a tough fight—he was actually behind on two of the three scorecards—with Adonis Stevenson before stopping the longtime champion in the 11th round (and sending him into a career-ending coma from which Stevenson eventually recovered). The 32-year-old has also scored impressive wins vs. Isaac Chilemba and Tommy Karpency.

Though Gvozdyk doesn’t appear to be quite as powerful as Beterbiev (14-0, 14 KOs) and probably won’t be as aggressive in the ring, he’ll likely be a better technical fighter than his opponent. But Beterbiev also has his own share of impressive victories, including a knockout of the then-undefeated Callum Johnson and a second-round stoppage of former world titlist Tavoris Cloud.

“He is a strong fighter,” Gvozdyk said, via Boxing Scene. “He’s a stylish boxer with rich amateur experience. I’m in the prime of my life. I can respond to him extremely well. This is a serious athlete and a serious challenge for me.”