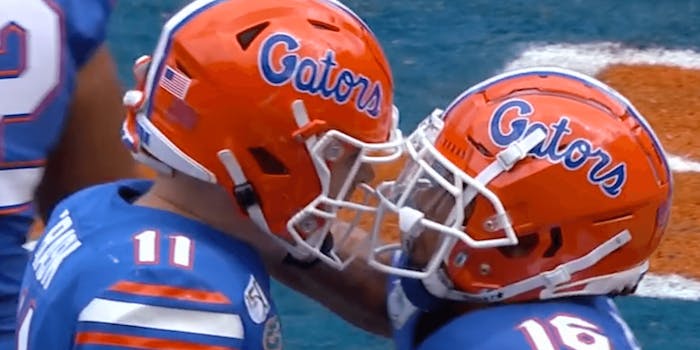 How to watch Florida vs. South Carolina

Florida comes to South Carolina for what could be a good ol' fashioned SEC slugfest.

The No. 9 Florida Gators will visit Columbia on Saturday to play a surging South Carolina team for an early-starting SEC matchup sure to pique the interest of college football fans across the country.

The Gators sit at 6-1 (and 3-1 in the SEC) following their 42-28 road loss to explosive LSU in a battle of heavyweights. Florida QB Kyle Trask threw for 310 yards on 59% passing with three touchdowns. Tight end Kyle Pitts had 5 catches for 108 yds, and Van Jefferson caught two scores. The Gators’ vaunted defense, however, was no match for the Joe Burrow-led Tiger offense – partly due to defensive ends Jabari Zuniga and Jonathan Greenard sitting with injuries.

The Gators allowed the Tigers to rush for 218 yards. Both Zuniga and Greenard are likely game-time decisions for Saturday, which means the Gamecocks’ running game could prove a factor.

Trask on the season has thrown for 1,191 yds, completing 93 of 136 attempts for 10 touchdowns and three interceptions. RB Lamical Perine leads the Gators with 392 yards rushing and four scores. David Reese II leads the team in tackles with 53.

South Carolina is now 3-3 (2-2 in the SEC) coming off a massive double overtime 20-17 victory at Georgia last weekend.

Gamecocks quarterback Ryan Hilinski connected on 15 of 20 attempts for just 116 yds and one TD in the upset victory over Georgia, but suffered a knee injury that will limit his mobility. Dynamic WR Bryan Edwards pulled in six passes for 78 yds and a touchdown. The South Carolina defense was led by Israel Mukuamu, who had himself a day with three interceptions, including a pick-six. Expect Trask to be wary of throwing in his direction.

Hilinski has hit 63% of his passes for 1,028 yards, six scores, and three picks. For Carolina to have a shot, he will need to be in the lineup—as he’s expected to be—and play well.

No. 9 Florida vs. South Carolina

Florida vs. South Carolina: What to watch for

Though Florida is the better team on paper, the best ability remains availability—and both Zuniga and Greenard will be limited if they suit up at all. South Carolina is already riding high with the confidence that they just beat what was supposed to be an even better team than the Gators last weekend. Their gameplan will be to muddy up the game, and stay connected into the fourth quarter.

However, Florida will arrive in Columbia with a sense of urgency, given the LSU loss on their ledger, and Mukuamu won’t be likely to get three picks off Trask. Expect Pitts to figure heavily into Florida’s gameplan.

Florida is a five-point favorite, according to Odds Shark. However, expect this game to be a slobberknocker with special teams coming into play.