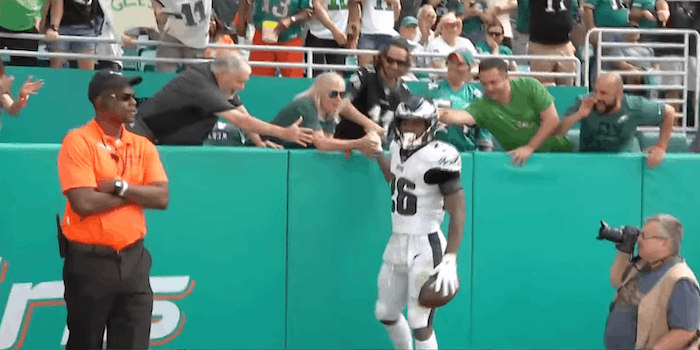 How to watch Eagles vs. Giants live on Monday Night Football

Two NFC East disappointments face off for bragging rights and little else.

For both the Philadelphia Eagles and the New York Giants, 2019 looks like a lost season.

The Giants knew their season was over early on, as Eli Manning continued his slide into has-been territory. The future Hall of Famer was benched for rookie Daniel Jones, but the Giants are languishing at the bottom of the NFC East with a 2-10 record.

In Philadelphia, the realization that the team was going nowhere was more painful. Though the Eagles have been just good enough to stay relevant for much of the season, last week’s ugly loss to Miami should spell the end of the road for a Philly that was supposed to be much better.

Technically, the Eagles aren’t eliminated from the playoffs. The underperforming Cowboys are only one game ahead of Philadelphia in the NFC East heading into this week. But the Eagles have no business in the playoffs. Carson Wentz has never quite figured out how to make the offense work with one of the worst receiving corps in the league. Though the Eagles have the seventh-ranked defense, they haven’t been able to score enough points for that to matter. And even if the D is good on paper, Ryan Fitzpatrick and the Dolphins just hung 37 points on them.

That being said, the Eagles should be able to beat the Giants, who can’t seem to do much of anything well. The Giants find new lows every week. Most recently, it was a beatdown by the Packers in which Jones threw three interceptions.

Odds are that the Eagles find a way to pull off a win here and keep their season alive for one more week, but neither of these teams is worthy of a late-season prime time slot. Here’s everything you need to know to live stream Eagles vs. Giants, including what to watch for on the field.

Eagles vs. Giants live stream: How to watch MNF online

Why has this Eagles team been so disappointing?

Though the passing game has been a huge letdown, it goes deeper than that. The Eagles have not quite figured out their running game despite Miles Sanders’ obvious talent. Outside of Sanders, Philly hasn’t been able to do anything on the ground despite the recent signing of veteran Jay Ajayi. Outside of Sanders, nothing is happening in the Philadelphia offense.

While the defense has played well statistically, Philly has had a tendency to give up lots of points. The Eagles let the Dolphins put up 37 points, lost to the Lions by allowing 27 points, and gave up over 35 points in consecutive weeks to the Vikings and Cowboys. When the Eagles get into a hole like that, the offense just can’t keep up.

The Eagles are a head-scratcher, because with players like Wentz and Sanders on offense, and Malcolm Jenkins and Fletcher Cox on defense, they should be better.

In New York, the problem is both coaching and talent. Besides Saquon Barkley, there aren’t really any special players to help Daniel Jones develop an offensive attack. Until he (hopefully) improves with experience and the team drafts more talent for surround him, the G-Men are a lost cause.

On defense, the story is the same. New York has one of the worst units in the league, marked by a complete inability to rush the passer. Giants fans have taken to saying they are in “The Chase for Young,” hoping that they take pass-rushing prospect Chase Young with the second draft pick. That doesn’t help matters this season though.

Expect the Eagles to win here, but neither team should feel about the state of things. Outside of the I-95 corridor, this game will be largely ignored, and for good reason—though maybe not as ignored as the season-ending rematch three weeks later in the Meadowlands.

The William Hill oddsmakers like the Eagles a lot here, making them 9 1/2-point favorites.