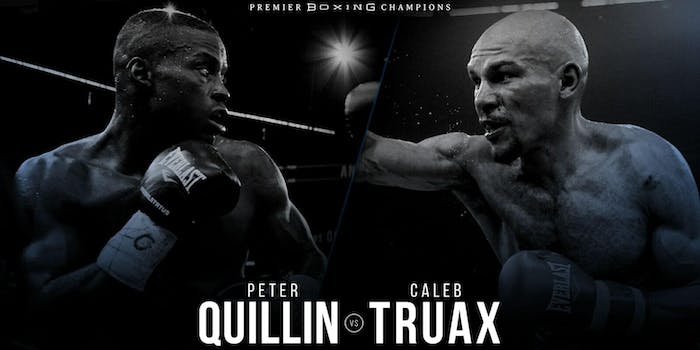 How to stream Caleb Truax vs. Peter ‘Kid Chocolate’ Quillin for free

It's a crossroads fight for two former world titlists.

Caleb Truax was never supposed to be a world titlist. Peter “Kid Chocolate” Quillin was supposed to be the kind of fighter that was good enough to take over a weight division. Neither of those hypotheticals came true, though, and when FS1 viewers tune in to the Truax vs. Quillin fight on Saturday night—which you can live stream for free—they’ll see two boxers standing at the crossroads of their careers.

Here’s everything you need to know to stream the Truax vs. Quillin fight for free.

Caleb Truax vs. Peter Quillin live stream: How to watch for free

All of the major live TV streaming services host FS1 programming, and all offer a one-week free trial. That means if you’ve never subscribed to one of those streaming platforms, you can watch Truax vs. Quillin without paying a dime. We’ve highlighted some of the best live streaming options below.

The telecast also features Sergiy Derevyanchenko vs. Jack Culcay in a middleweight title eliminator in the co-feature bout, and 19-year-old undefeated junior middleweight prospect Joey Spencer opens the show with a six-round contest vs. Osias Vasquez.

Aside from all the services highlighted below, you can stream the fight via the Fox Sports app in either English or Spanish. You can also watch it on your computer’s desktop via FoxSports.com.

With Sling TV, you can choose à la carte channel packages—which is different than other streaming services. That means you have the choice for how much you want to pay (between $25 and $40) for the channels you receive. To get FS1, you’d need either the Sling Blue or the Sling Orange + Blue packages. Sling TV is also currently offering a deal where you can subscribe for 40% off the regular price for the first three months of your subscription. Here’s a complete guide to Sling TV channels and our Sling TV review.

If you want the ability to watch TV and movies on demand and stream live TV, Hulu is the service for you. This is a great way for people to catch up on all the shows they missed when they were originally broadcast on network TV, while also having the ability to stream live boxing. Here’s the complete list of Hulu Live TV channels.

PlayStation Vue’s $44.99-per-month Access package includes both FS1 and FS2, as well as FX, CNN, AMC, ESPN, and more. PlayStation Vue has a trump card, though: It’s Kodi compatible. You can see the full list of PlayStation Vue channels here. Plus, you can stream on up to five devices at once, and there’s unlimited cloud DVR.

If you love international sports, FuboTV could be the best option for you. FuboTV continues to improve itself with new sports coverage, including global soccer, and it continues to have some of the best local TV coverage of any other streaming service. Here’s the complete FuboTV channels list.

YouTube TV not only features FS1 and FS2, but it also includes Fox Sports, basic Fox, and MLB Network. That’s on top of a robust if fairly basic plan that also includes FX, NBA TV, and AMC. This week, YouTube announced it was jacking up its price by $10 to $49.99. But it’s still a good deal considering you can add up to six accounts per household and each one gets unlimited cloud DVR. Here’s a breakdown of the full YouTube TV channel lineup.

Caleb Truax vs. Peter Quillin: Why it matters

In December 2017, Truax traveled to James DeGale’s home country of England and won a shocking upset to take DeGale’s super middleweight title. Before the fight, DeGale was a -10000 favorite, meaning you’d have to wager $10,000 to win $100. Instead, Truax outfought him brilliantly for much of the night, leading to this celebration when the scorecards were read and it was revealed that Truax had not been screwed by the judges.

Truax (30-4-2, 19 knockouts) was never considered an elite boxer, but by having the best performance of his career in his most high-profile fight, it led Truax to the world title he had long sought. But he lost the rematch and his belt back to DeGale, and though he knocked out a non-descript opponent in August, Truax, at 35 years old, might not have much time left at the highest levels in the sport.

“I’m definitely confident of my hand being raised at the end of a fan-friendly fight,” Truax told Premier Boxing Champions. “I think my pressure will back Quillin up and he won’t be able to deal with it. I don’t see any way where I’m not the winner.”

Quillin (34-1-1, 23 KOs), meanwhile, has something to prove. He won a 160-pound middleweight title versus a solid fighter named Hassan N’Dam in 2012, and he defended his belt three times. Quillin also has a win over Hall of Famer Winky Wright. But in 2015, he ran into Daniel Jacobs in the most significant night of Quillin’s career. And that’s when this happened.

Quillin took the next 22 months off, and after beating another solid fighter in J’Leon Love seven months ago, Quillin is looking for redemption, even if he has to do it in front of Truax’s hometown Minnesota fans.

“I’m approaching this fight very seriously because I know Truax is a durable guy who knows how to fight,” Quillin said. “He comes from a background where people don’t give him credit for what he’s done, and those are the most dangerous guys. I’m no stranger to fighting in my opponent’s backyard. My job is to go into the ring and go home with the win. I’m looking to walk away with some of his fans on my side by winning the fight and putting on a great performance.”

This fight is a title eliminator, meaning the winner would likely be the mandatory opponent for titlist Caleb Plant. Despite the odds, this feels like a toss-up fight to me. It should be a good one to live stream.