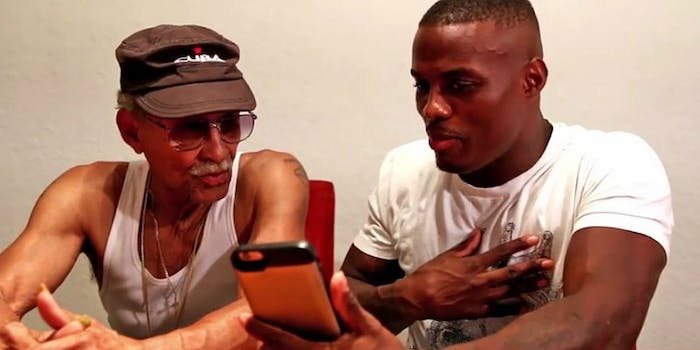 For boxers, the business of social media jabs is booming

'The more a person can talk, the more hype the fight will get.'

When Paulie Malignaggi began his pro boxing career in 2001, Facebook was three years away from its introduction. Myspace hadn’t been invented either, and not even Friendster existed. No Twitter and no Instagram. Social media occurred only when a bunch of reporters went out for drinks after making deadline.

If boxers wanted to get noticed by what can be a fickle fanbase, they had to do it the old-fashioned way: they had to win, do so impressively, and on television. It would help if a pugilist had the personality (and skill set) of a Muhammad Ali who could draw fans to arenas because either he was so lovable that they wanted to see him win or because he was so antagonizing that they wanted to see him get blasted.

Before social media, a fighter like Malignaggi might have had a tougher time getting noticed. He’s a two-time world titlist, and his skills as a boxer have always impressed. But Malignaggi doesn’t own much knockout power, and for many of his wins, he’s had to rely on his defensive abilities and his slickness to grab unanimous decisions. He’s got a compelling personality and he could always hype a fight with a little trash talking, but without any kind of social media outlet, Malignaggi might have never become a fighter with a legitimately large following.

He also might not have his job as a boxing color analyst for CBS, Fox, and Showtime.

“Now, it does also give the haters a chance to flood your page with garbage. But overall, it’s been good.”

“When Myspace came out, I was already a couple years into my professional career,” Malignaggi told the Daily Dot earlier this month after commentating on a nationally televised boxing card for Fox Sports. “Social media has changed so much, and it really helps boxers from a marketing perspective. Fans can get access to athletes a little more than in the past. It used to be that there was no accessibility.

“Now, it does also give the haters a chance to flood your page with garbage. But overall, it’s been good.”

To illustrate that point, Malignaggi was inundated with at least a dozen selfie requests after the fights were over that night. Presumably, many of those images featuring a smiling Malignaggi with fists posed in a boxing stance ended up on Facebook, Twitter, and Instagram where people who aren’t familiar with him were indirectly introduced to him—his reach expanding one upload at a time.

And maybe, just maybe, if Malignaggi—who has a caree record of 34-7 with seven knockouts—ever fights on national TV again, the audience of casual fans who might remember him because of those selfies might choose to spend their time watching his fists fly. And if he doesn’t fight again, a social media following that includes 129,000 fans on Twitter could help him in his post-boxing life.

“If you can show them you have a strong social media following,” he said, “well, that’s always going to allow you to pick up sponsors or get more commentating jobs.”

One of the biggest fights of the calendar year takes place Saturday night when Miguel Cotto and Saul “Canelo” Alvarez—two of the 20 best fighters in the world—wage a battle in the middleweight division.

Cotto has more than 500,000 Twitter followers and Alvarez has a few thousand more than Cotto, but neither account is very exciting. They’ll tweet photos and videos from training camp, which is interesting enough, but they also try to sell fans on subscribing to their YouTube channel or attempt to sell merchandise. There’s not much, if any, trash-talking, and following them on Twitter probably isn’t a necessity for most casual boxing fans.

But consider Deontay Wilder, who was the first American to win a heavyweight title in nearly a decade when he beat Bermane Stiverne last January. Wilder is a good quote with a fun personality, and though he claims he tries to stay away from Twitter beefs, that doesn’t mean he’s always successful in avoiding them.

Before facing Stiverne, the two engaged a in public war of words, and after naming Stiverne’s title belt “Sophia,” Wilder began using the hashtag #RoadToSophia and created the @SophiaTheBelt Twitter account.

But that’s minor trash talking compared to what emerges from the fingertips of Tyson Fury, who will face Wladimir Klitschko on Nov. 28 for all three of Klitschko’s heavyweight hampionship belts and who’s also made it clear he wants a piece of Wilder.

And after Klitschko had to postpone their bout in September because of an injury, Fury took to Twitter to spew his frustrations.

That kind of rancor even managed to get Klitschko, as thoughtful a man outside the ring as a boxer can be, to engage in a little Twitter smack talk.

@Tyson_Fury how many rounds did your mouth do today?

“[Social media feuding] is good for business,” Wilder told the Daily Dot. “People love to see what two men are going to do to each other. The more a person can talk, the more hype the fight will get.”

Wilder even gets the spectators physically involved. After a Twitter user named Charlie Zelenoff threatened Wilder and his daughter via social media, Wilder met him for a real fight that was caught on tape and went viral.

The brawl was cathartic for Wilder and made plenty of Internet noise, but Wilder also knows a boxer has to be careful.

“In that particular situation, even though everything went right on my end and made me look like the hero—especially defending against the cyberbullying—that so easily could have gone wrong to me,” he said. “I felt like I was doing the right thing, defending myself and my family. But if it goes wrong, that would make me the villain. Sometimes the villain is good, and it could have been a win-win that way, too. But I’m the type of guy who likes to be the good guy.”

That has not been the strategy of Floyd Mayweather, who’s retired but who’s accumulated a list of 6.5 million Twitter followers and 9.1 million on Instagram—in part, because he posts things like this.

Just a normal house party at 5:16am for Mr. My Life is the Sh*t. pic.twitter.com/nPN2jehuhy

That plays perfectly into Mayweather’s persona, as a filthy rich cartoon villain who hangs out all hours of the night with twerking women and throws around $100 bills like he’s dumping fun-size candy bars into the Halloween baskets of children. Though he’s retired, he’s been boxing’s biggest star for the past decade, even if millions of people have bought his pay-per-views just hoping he would lose.

“Social media can be helpful to a boxer to a certain point,” former super middleweight title contender Librado Andrade told the Daily Dot. “But with Facebook and Twitter, you have to be mature about it. Some people are terrible at it, and it turns people off.”

Instead, boxers like Peter “Kid Chocolate” Quillin, a former titlist who’s fighting Danny Jacobs next month for his middleweight belt, have a strategy when it comes to social media. For Quillin, it’s about staying true to his personality, because he doesn’t only see himself as a boxer. He sees himself as a figure the public wants to know.

“We’re living in that time right now where social media is the new TV,” Quillin told the Daily Dot on a recent teleconference. “That puts you out there a little bit more. You’ve got some guys who put themselves out there in a negative way, and if you go follow me on social media you see that I put out positive things. I want people to feel more fulfilled and inspired by my story and also who I am as a person.”

That’s why Quillin has been active on Twitter and YouTube and puts out videos like the one below. Sure, it’s a Jimmy Kimmel ripoff, but that doesn’t mean his fans don’t love it.

And for many fighters, that’s the whole point. Forget about beefing with each other; most of that is just fluff anyway. For a large portion of pugilists, the idea of engaging on social media is simply to give their fans (and the paying public, in general) a closer look at their lives outside of the ring.

For a boxer like Miguel Flores, who’s trying to make a name for himself as he’s at the beginning of his pro career, gathering as many fans as possible and earning their goodwill is the right approach. He knows building a fan foundation now could be the key to earning millions of dollars per fight later. That couldn’t have been the approach of Malignaggi when he started in 2001, but for today’s younger fighters, social media is an enormous part of that foundational construction.

“Nowadays social media is where it’s at; it’s everything,” Flores told the Daily Dot earlier this month after improving his record to 18-0. “I try to follow back. I try to write back. I just want to interact. If they ask for a shirt, I try to get them a shirt. All I want to do is just please the fans.”