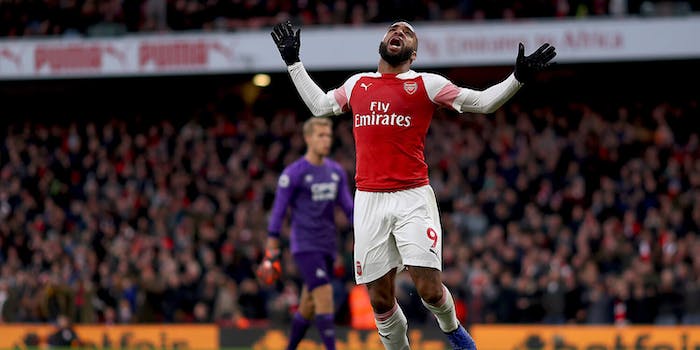 How to stream Arsenal vs. Manchester City live

It's a battle of top Premier League teams not quite satisfied with where they're at in the standings.

Arsenal finally kicked its seven-match winless streak to the curb with a 3-1 win over West Ham on Saturday. The Gunners then proceeded to go down 2-0 in Europa League play against Standard Liege before mounting a comeback to secure a late draw. That’s become a rather Arsenal move this season. They’ll now have to host a Manchester City side 10 points and six places above them in the table.

City’s got more concerns than just Arsenal on Sunday though—namely, how to make up the 14-point gap that’s opened up between City and Liverpool in the title race.

Here’s everything you need to know to stream Arsenal vs. Manchester City live.

Arsenal (last five Premier League matches: LDDLW) had to again come from behind in its match with West Ham last week, but it had an excellent nine minutes, getting three goals between the 60th and 69th to gut out the win. It’s the first for interim manager Freddie Ljungberg, who is not making a strong case for himself in the early going. Still, though, a win is a win, but it’s increasingly looking like the team will only get to Champions League play by winning Europa League. (It’s done more than enough to advance to the next phase of play.)

Manchester City (last five Premier League matches: LWDWL) lost its derby to United last weekend, putting it three points further back of Liverpool in what looks like a fading title defense. There’s still Champions League, though. City won handily in midweek play, finishing its unbeaten group play with a 4-1 win over Dinamo Zagreb. With an eye on the Champions League Round of 16 draw on Monday morning, maybe the trophy Liverpool won last year is the one that City’s really in contention for this year.