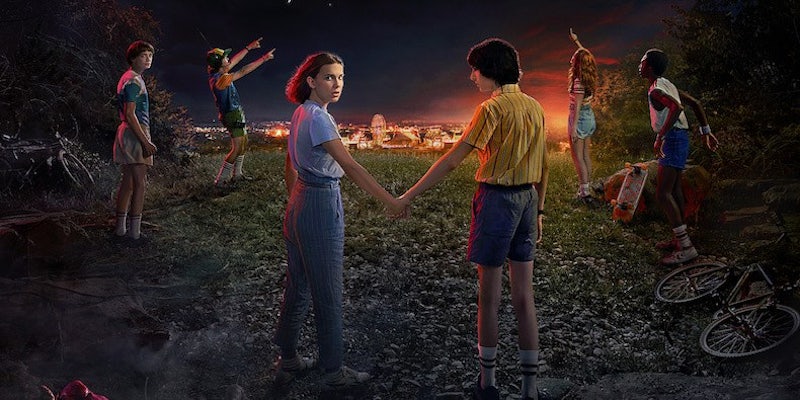 'One summer can change everything.'

Netflix kicked off 2019 with a surprise announcement, revealing the release date for Stranger Things season 3 in a teaser video and new show poster. On March 20, we finally got a proper trailer.

The viral, nostalgia-soaked TV show from twin brothers Matt and Ross Duffer returned with its second season in October 2017, just in time for Halloween. The new season—which the Duffer brothers have said should feel more like a movie sequel—brings us back to Hawkins, Indiana, one year after Will Byers has been saved from the Demogorgon for a darker, horror-filled storyline.

Much like the season 1 finale, season 2 ended with far more unanswered questions than resolutions. What exactly is the Shadow Monster, and how is it related to the Demogorgon, if at all? Who exactly is Kali, and is she related to Eleven? And will Dustin ever get a girlfriend?

Fans may not have any of the answers to the questions above, but here’s everything viewers do know about Stranger Things season 3 so far. The biggest thing to note: Season 3 will begin in the summer of 1985, Executive Producer Shawn Levy said so on March 25, 2018—and the cast it’s got lined up is stacked with new players. We’re also headed to… the mall, as fans also soon learned.

On Dec. 9, the show revealed some important details via episode titles that online sleuths are busy decoding.

In the summer of 1985, the adventure continues… pic.twitter.com/m3s6hyJL8k

We don’t know much beyond the episode titles:

Suzie, Do You Copy?
The Mall Rats
The Case Of the Missing Lifeguard
The Sauna Test
The Source
The Birthday
The Bite
The Battle of Starcourt

The show began filming in the fall, and Levy said that “Dad Steve” will be back.

“We’ll definitely get to see some more of Steve Harrington in Season 3, and I’ll just say we won’t be abandoning the Dad Steve magic. I don’t want to say much more, but I literally feel that we were walking along and we stumbled onto a gold mine with Dad Steve,” he told the Hollywood Reporter.

He added that we can expect more to blossom between Mike and Eleven.

In an interview with Vulture, the Duffer brothers not only confirmed the third season but also said they intend to wrap up the TV show at the end of the fourth season.

“We just have to keep adjusting the story,” Matt said. “Though I don’t know if we can justify something bad happening to them once a year.”

There have been conflicting rumors about how Netflix intends to film and roll out the fourth season. One theory suggests Netflix wants to finish filming the series as soon as possible to wrap up the story before the child stars outgrow their characters or get snatched up by bigger, more lucrative roles in Hollywood.

The Duffer brothers, along with executive producers Levy and Dan Cohen, reportedly vetoed that idea because the small writers’ room cannot churn out episodes quickly enough. The more likely theory suggests the writers will adapt the storyline to match where the kids are at in real life.

Speaking with the Hollywood Reporter, Matt Duffer said that season 2 purposefully ended without a serious cliffhanger to leave the door open for season 3—even though the finale closed with an ominous look at the Upside Down.

A July 16 video from Netflix previews the new mall opening in Hawkins and is full of ’80s gems, but it has a nugget of new information contained within. It not only gives us our first look at Robin (the character played by new cast member Maya Hawke), it reveals that Steve Harrington has a new job and works with Robin as an ice cream scooper at an ice cream shop called Scoops Ahoy.

It’s difficult to imagine Hawkins, Indiana, without Mike, Lucas, Dustin, and Eleven, but as each child star’s career blows up, the cast of the show becomes more and more uncertain. While actors Finn Wolfhard, Millie Bobby Brown, Gaten Matarazzo, and Caleb McLaughlin have all signed a six-year contract, according to the Hollywood Reporter, a renegotiation in 2018 raised the salaries for Wolfhard, Matarazzo, and McLaughlin, according to Complex. It’s unclear how much Brown is now earning, Winona Ryder and David Harbour are reportedly receiving $300,000 per episode.

On April 18, ’80s icons Cary Elwes and Jake Busey were confirmed for season 3, joining the news that Maya Hawke is one of the new leads. Priah Ferguson, who plays Lucas’ sister, will also have a recurring role. Elwes will play Mayor Kline while Busey is a dogged journalist for the local newspaper.

Indeed, a teaser video published on April 28, 2018, which revealed that production for Stranger Things season 3 had begun, confirmed all of the big names are coming back.