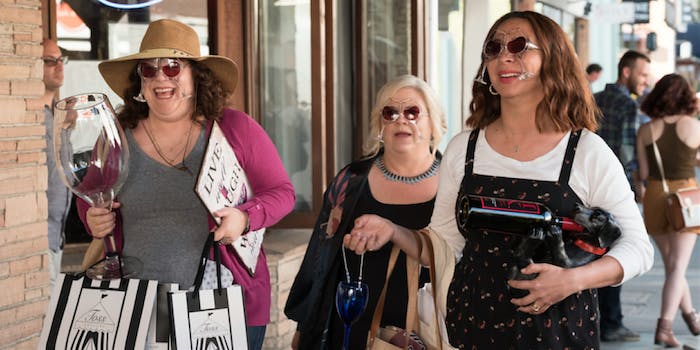 ‘Wine Country’ is a sobering comedy about middle age

The 'SNL' reunion has all the right players. It just doesn't know what to do with them.

Wine Country isn’t really about wine. It’s about six women trying to figure out how they—and their friendship—have aged.

Inspired by Dratch’s actual 50th birthday trip to Napa Valley, Wine Country gives us a lot of information up top, and the cast is heavy on former SNL cast members and writers, so a gathering of comedic talent this vast holds promise. For a little while.

The narrative revolves around the women’s insecurities and apprehensions at a certain age. Research professor and The Gifts of Imperfection author Brené Brown makes a cameo; Rebecca asks if she can offer “some feedback” during conflicts; Catherine proposes microdosing molly because she heard about it on a podcast, which turns into the women listing all the prescription drugs they’re on and Naomi improvising made-up drugs. (Elsewhere, Naomi burps and farts at the same time, and I felt very seen.) Later, a pushy tarot card reader (Cherry Jones) exposes their insecurities and leads the movie into its second half.

We don’t get a lot of films about women in their 40s and 50s or the dynamics of friendships at that age, so Wine Country is remarkable in that way. These women are worried about their agency, bodies, becoming invisible, looming test results. But the movie’s second half (in which the wine tastings actually happen) isn’t sure where to go with all that. The women don’t actually care about the intricacies of wine culture, which leads to some of the film’s funniest exchanges and wine-based puns. But while the movie gives some exposition to Abby, Val, and Naomi’s issues, other characters, like Jenny, barely have a backstory or point of view.

Some moments also feel out of sync: After Val befriends a waitress named Jade (Pen15’s Maya Erskine) in hopes that it can become something more, the women attend her Fran Drescher-themed art show. They start talking down to a few of the millennials in the crowd for being obsessed with their phones and the internet, and it’s hard to discern whether it’s a parody of privilege or commentary on older women’s visibility. The women remind us a few times that they all became friends while working at a Chicago pizza joint in the ’90s, and they even transform Rebecca’s birthday brunch into a replica of the restaurant, which is kind of weird. (But it seems pizza place equals SNL.)

There are no Bridesmaids moments of gross-out humor, and Poehler rightly reins in that instinct in favor of nuance. There’s also some good physical comedy towards the end, especially after Rebecca injures her back. The film captures the unique momentum of women’s friendships beyond our 20s and 30s, and some of the best moments come from them just hanging out, talking shit, drinking, and making playlists. It makes you wonder if Wine Country would have been funnier if its stars weren’t playing characters, just being themselves.