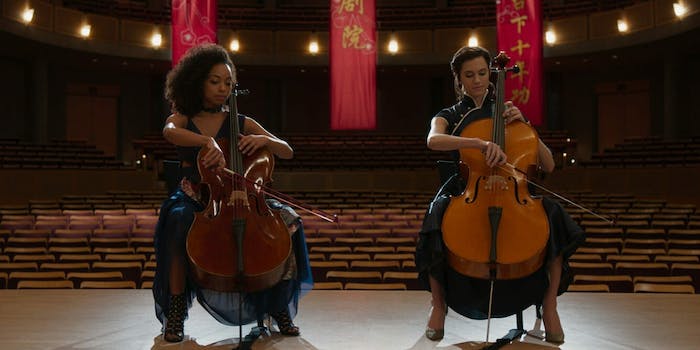 Netflix’s ‘The Perfection’ is a totally unhinged, WTF horror film

Watch at your own risk.

Several hours after watching Netflix’s new original horror film, The Perfection, I’m still unsure if I’d recommend it to people. The film, which stars Allison Williams and Logan Browning as two cello prodigies, is completely off the rails. At times it feels like a soapy Lifetime film, with one of the characters repeatedly calling another a “bitch”—as if there is no other word to describe a woman who did something seemingly evil. But there are also moments when it feels like a smart, campy arthouse film, thanks to its creative narration style and chapter divisions. The result is a strange yet watchable horror film that will likely inspire a lot of discussions after it arrives on the streaming service Friday.

The Perfection‘s execution relies on the audience not knowing what will happen next or for whom to root. But here’s the general plot: Lizzie (Browning), a young, talented cellist, connects with her school’s former star student, Charlotte (Williams), during an event. The pair have instant chemistry and spend a night together, but the next morning Lizzie becomes extremely ill. Several graphic scenes involving vomit, bugs, and mutilation follow. The first half of the film isn’t really scary; in fact, it’s often funny. Yet it’s purposely confusing. You don’t know exactly what you’re watching or how it’s all going to connect.

Without its unique narration style, The Perfection would feel silly. But it’s smartly edited to mislead viewers. You don’t know who the true villain of this horror film is—and there definitely is one. The ending is wild and horrific, but it’s also satisfying. Some scenes are extremely uncomfortable, like the ill-conceived “fake” rape scene. The film seems designed to shock viewers, but it doesn’t always put its female leads in the best light.

Browning, who stars in the Netflix series Dear White People, does her best with the material but often gets saddled with cheesy lines. Williams has a meatier role that will inevitably draw comparisons to her character in Get Out. The film also stars Steven Weber as Anton, their music instructor. The film does not reveal the full scope of his role until its turbulent end. What you think you’re about to watch is a typical story of a demanding music instructor and an obsessive student who goes crazy, like 2014’s Whiplash. But The Perfection, while campier in style, is about something much darker than trying to become a “perfect” musician.

Be warned: The Perfection includes scenes and discussion of rape, and it shows men in high positions abusing their power. It’s a horror film that feels relevant in the post-Me Too era, but it’s still a story about abuse. Even if it shows survivors coming to terms with their abuse and seeking revenge, the abuse still happens. The Perfection doesn’t do a good job of answering why or how institutions knowingly let these horrific acts happen without consequences. It’s more focused on presenting a tightly constructed horror plot. The film falls into that bad-good category, but it’s much better than a lot of other horror movies on streaming services. If you want to see a wild, deranged film, it might be for you. My one recommendation? Don’t eat a meal while watching it.