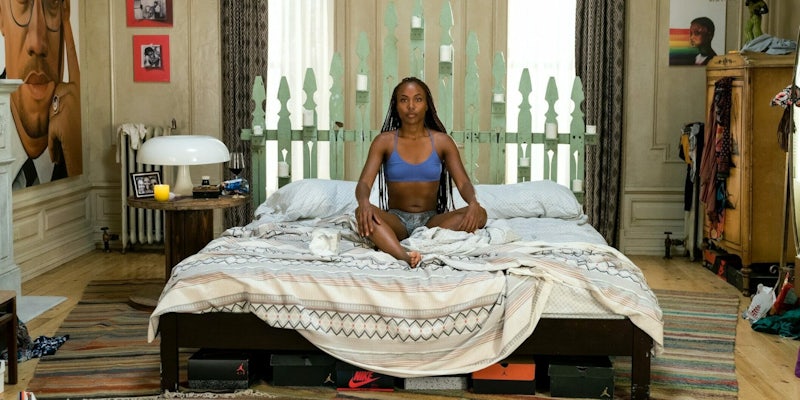 In season 2 of ‘She’s Gotta Have It,’ Spike Lee remains unapologetically himself

At this point in his career, Spike Lee should be allowed to do whatever he wants. After directing the best movie of last year and winning a long-overdue Oscar with BlacKkKlansman, the 62-year-old auteur has earned a victory lap. But if Lee has proven anything over his career, it’s that he never stops moving forward. Every time you count him out, he comes back with another masterpiece, and you have to count him back in. Though not the crowning achievement in his recent reascension, Netflix’s She’s Gotta Have It makes Lee feel more relevant than ever.

She’s Gotta Have It: Season 2

Season 2 of ‘She’s Gotta Have It’ finds Nola Darling once again navigating the worlds of art and love in Fort Greene, Brooklyn.

The first step in a logical partnership with Netflix (he’s also directing the upcoming Da 5 Bloods for the streaming service,) the sophomore season of Lee’s adaptation of his debut film features protagonist Nola Darling (DeWanda Wise) once again navigating the worlds of art and love in Fort Greene, Brooklyn. She’s moved on from her three male lovers to pursue a more serious relationship with Opal (Ilfenesh Hadera), the single mother to whom she previously couldn’t commit. Things are going great for the happy couple at first, but because this is Nola Darling, they don’t stay uncomplicated for long.

When She’s Gotta Have It debuted on Netflix over a year ago, I wrote that its exploration of sex positivity and gender dynamics felt wholly of the time, despite being based on a movie that came out before I was born. Season 2 feels no less timely, as Lee continues to explore how we think about relationships in 2019, as well as what Blackness looks like in the age of gentrification, cultural appropriation, and Trump. Just as season 1 dealt directly with current events, season 2 sports a few ripped-from-the-headlines moments, such as an episode that takes a detour into Puerto Rico to examine life after Hurricane Maria and the heritage of Puerto Rican New Yorkers.

But if I missed anything in my season 1 review, it’s that I tied the show too much to the movie’s central conceit of a woman with three boyfriends. The show was never really about the fact that Nola had three boyfriends—it was just about Nola. The second season hammers this idea home even further, as two of those men, Greer (Cleo Anthony) and Jamie (Lyriq Bryant), largely disappear from the storyline. The Nola Darling we get here wrestles more with her identity as an artist than her identity as a partner.

The only man who does get more screen time is Mars (Anthony Ramos), which make sense, as he’s by far the most compelling of Nola’s suitors. During the trip to Puerto Rico, we even meet his mother, played in a fantastic cameo by one of Lee’s OG collaborators. (You’ll have to watch for yourself to see who it is.) This storyline results in a twist that lands somewhere between shocking and silly, though I chose to go with it anyway.

Regardless, the indisputable star is Wise. Though Lee still occasionally has a hard time framing female characters without sexualizing or victimizing them (while the notorious butt shots storyline from last season reappears briefly, it thankfully gets little screen time), Wise’s fantastic performance compensates for his faults. Nola Darling is uncompromising to the point of being infuriating, but in Wise’s hands, that confidence mixed with an underlying vulnerability also make her character feel vital.

Perhaps my main criticism of She’s Gotta Have It season 2 is that Nola occasionally gets lost among Lee’s, well, Spike Lee-ness. From the beginning, the show has been a rich pastiche of Black ideas and culture. One especially cool set piece this season takes place at an actual festival Lee organized in honor of Prince. Yet in his attempts to cram as many of his favorite things into the series as possible, Lee risks turning She’s Gotta Have It into a career retrospective rather than a fresh season of TV. Lee has never been a subtle director, and season 2 has some painfully clunky beats. Yet there’s also a sense that Lee might just be taking that aforementioned victory lap.

I can’t really be upset about this. The very Spike Lee-isms that threaten to undermine this show are why I fell in love with it in the first place, and with Lee’s work as a whole. This is a Netflix series, so I have no idea how many people actually watch She’s Gotta Have It, and I have no idea if it’ll get renewed for a third season. But as long as it’s on, I’ll gladly follow this show as it goes full “Spike Lee extended universe.” The man deserves to flex a little.