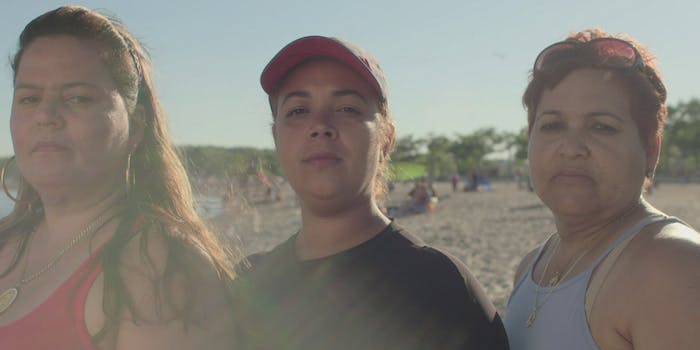 Netflix’s After Maria follows three women living out of a New York hotel. Forced to flee their homes in Puerto Rico after Hurricane Maria, the women are about to be displaced once again, this time by FEMA. The women—Glenda, Kenia, and Kenia’s daughter Nilda—have become a makeshift family. As three of the tens of thousands of Puerto Ricans displaced by Hurricane Maria, their individual stories are striking, but not uncommon. Neither are the failures of the U.S. government in responding to the tragedy. The politics around the response to Maria have dominated the discourse, but director Nadia Hallgren wisely keeps the focus of her documentary on Glenda, Kenia, and Nilda. In doing so, she takes a story that overwhelms in its macro form and makes it intimate.

‘After Maria’ follows three women forced to relocate to New York after Hurricane Maria destroyed their homes in Puerto Rico.

At its best, After Maria is a searing portrait of displacement and personal resilience. It’s a vital reminder that we must never forget about the people who can get lost amid heated debates and staggering statistics. Take, for instance, 11-year-old Nilda, who talks about how she doesn’t want to leave her dog, Chico, behind when she moves. She deals with bullying for the first time in her life while going to school in New York. Her story is infinitely relatable, and yet she can relate to no one. She describes her school life thusly: “I’m from another country. I’m not from their country.”

Through Glenda and Kenia, we see the logistics of displacement. We watch as they find some semblance of home among New York’s Puerto Rican population. We see them struggle to find a place to live once their hotel stay is up. Per the film, FEMA—whose relief effort failures are well known—is supposed to help displaced people find permanent housing. The victims of Maria received no such offer. Instead, people like Glenda and Kenia are put up in a hotel and given nothing more than a deadline to vacate and a one-way ticket back to Puerto Rico. The lack of humanity is chilling. It makes the small moments of happiness more bittersweet, like a small celebration for Nilda’s 12th birthday. When happiness is fleeting, you snatch pieces of it whenever and wherever you can.

In its 37-minute runtime, After Maria touches on the larger debate surrounding the bungled relief effort, but it doesn’t go far beyond the familiar news clips. President Trump shooting rolls of paper towels into a crowd of people who have lost everything like he’s practicing free throws is just as callous and dehumanizing now as it was then. Puerto Rican Governor Ricardo Rosello’s anger is still palpable as he lodges criticisms in interviews. These visuals makes me want a deeper dive into post-Maria Puerto Rico than a documentary short can offer. But that’s a task for a different film, and it’s not what Hallgren is chasing with After Maria.

With its abbreviated length, After Maria finds its strength in the daily struggles of people like Glenda, Kenia, and Nilda. It functions more as a reminder than a call to arms—a reminder that the road to dehumanization is shorter than most of us realize. Almost two years after Maria, the sluggish and seemingly endless recovery process is enough to crush even the strongest spirits. Kenia and Nilda had to go back to Puerto Rico when their hotel vouchers expired on June 30, 2018. But they couldn’t salvage their home, and when they exhausted their limited options, they had no choice but to make another go of it in New York.

Glenda’s family remains homeless. Puerto Rico can’t be the home it once was for most of its inhabitants. For evacuees in New York, Florida, and elsewhere, the search for a new beginning is full of dead ends. After Maria zooms in on a few of these individual struggles, but it could easily become a series of documentaries. Puerto Rico will be dealing with the aftermath of Hurricane Maria for a long time. Hopefully Hallgren follows up with Glenda, Nilda, Kenia, and other survivors. It’s crucial that we don’t let their stories get buried as time passes.