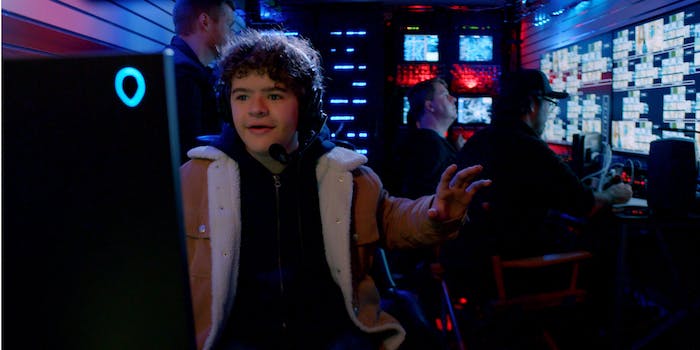 The scare tactics in 'Prank Encounters' are pretty underwhelming. So is the acting.

It seems like a fossil of early-aughts TV now, but Punk’d at least showed us something about the nature of celebrity in the TMZ era. The MTV prank show luxuriated in drawing out reactions from Ashton Kutcher’s celebrity friends, who were often this close to letting their executive privilege fly. Netflix’s Prank Encounters is a riff on Punk’d, but it doesn’t do anything to set itself apart.

Its premise, at least in the two episodes offered for review, involves pranking people who think they’ve been hired for a job. Host Gaten Matarazzo (Dustin from Stranger Things) holes up in a command center where he’s pulling the strings, much like Kutcher in Punk’d. In “Teddy Scare,” a woman is hired to babysit a girl whose sister recently died, and who has an odd attachment to a giant teddy bear. The girl (the best actor in this episode) floats the theory that the bear killed her sister and the babysitter does not have much of a reaction to that. In “End of the Road,” two women are hired to help suss out what’s causing a string of mysterious car crashes on one stretch of country road, only to be scared repeatedly by a Sasquatch.

When the series was announced over the summer, its premise caused some backlash: People bristled at the idea that unsuspecting candidates were brought in for what they thought were jobs and then pranked by Dustin from Stranger Things. Netflix defended the show, assuring that those involved were “paid for their time” and knew it was a one-day, hourly gig. Matarazzo followed up with his own video. But quality is more of a red flag here: The reactions from the people getting pranked (who are not supposed to be actors) are so formal and stiff that it feels like watching bad improv. In “Teddy Scare,” the actor who’s supposed to be the mother cheerily greets her daughter like she’s meeting her for the first time. This bad acting suspends any sense of surprise or horror.

Matarazzo usually shows up at the end to reveal that he—Dustin from Stranger Things!—was behind the operation. At the end of the Sasquatch episode, he tells a van full of terrorized actors and participants, “You’re on my new Netflix show, Prank Encounters,” and their unamused reactions finally seem authentic. He mentions that he’s the kid from Stranger Things one more time before the episode ends.

I know the Stranger Things cast has to diversify its brand, and Netflix is obviously happy to help. But several pre-existing prank shows already follow the same format; YouTube and TikTok are full of videos of people getting pranked more organically. Shows like Nathan for You and Who Is America? tie elaborate pranks to bigger points more creatively. Think of how many Netflix shows star teenagers or young actors: They could all be pranking each other! It would be a more engaging watch.

Is Prank Encounters, hosted by 17-year-old Matarazzo, trying to say something about the gig economy? Workers’ rights? People got very impassioned about the show’s alleged premise, revealing personal struggles in online forums and threatening to cancel their Netflix subscriptions. But it’s pretty clear Netflix was just trying to put out a Halloween show with a recognizable star and draw in younger viewers. Punk’d?