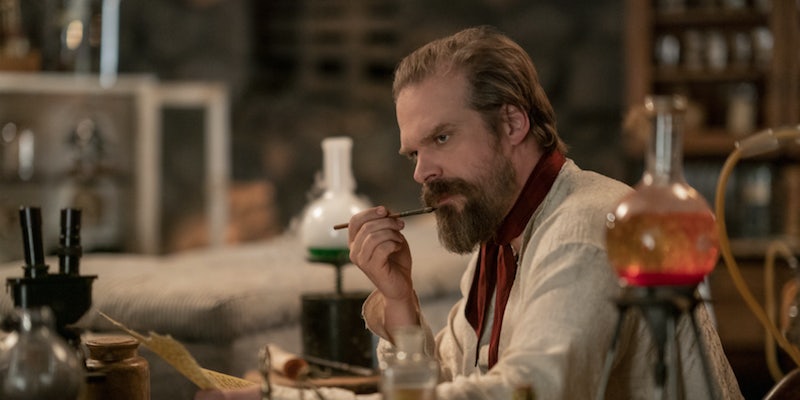 The 30-minute Netflix short probably should have just been a sketch. But maybe that's the point.

Harbour, one of the stars of Netflix’s Stranger Things, gets to flex his capital-A acting muscle in this 30-minute short, and Netflix no doubt lined up the release to coincide with the mass theorizing about Chief Hopper’s fate. Harbour plays himself here, investigating the titular play his ac-tore father David Harbour Sr. starred in, as well as the drama between his father and his co-stars (Alex Ozerov and Kate Berlant). In perhaps a bit of brand synergy, Harbour found footage of the play while killing rats in his mom’s attic, which echoes a storyline from Stranger Things‘ latest season.

Like Netflix’s other recent 30-minute not-a-film-but-not-a-TV-show, The Unauthorized Bash Brothers Experience, FMMF defies easy categorization. It’s being touted as a “Netflix playhouse featurette” and is heavy on theatrical references—there’s an extended joke about Chekhov’s gun. The premise—that Harbour is trying to find out something about his estranged father—implies that there should be some emotional resonance. But that void is filled instead with long, awkward takes; stilted dialogue; and bad editing.

And that all feels very deliberate. Director Daniel Gray Longino has worked on Pen15, Kroll Show, and Check It Out! with Dr. Steve Brule. Writer John Levenstein (Baskets, Kroll Show) is similarly versed in sketch and sitcom forms. It is fun to see the little mess-ups, like Berlant having to pull a door closed after dramatically exiting, or taking the longest route possible to establish a better blocking shot, and FMMF tries to recreate an era of TV that feels ancient now, complete with a parody of Orson Welles’ drunken commercial for Paul Masson wine. A bad improv scene with Berlant gave me the only real laugh of the viewing.

If “My father was a monster” is the takeaway—and Harbour literally says that—the road there feels a bit unfinished. FMMF could have just been a sketch, but perhaps that’s the point: Here are bad actors overacting for way too long. And maybe that’s what Netflix is experimenting with. The recent I Think You Should Leave showed what an efficient sketch series can look like, and the Lonely Island’s Bash Brothers showed another method of delivery. Maybe FMMF is part of a new approach to presenting sketch comedy to viewers in fun-size bites that take a while to digest, and leave you wondering what you just watched.